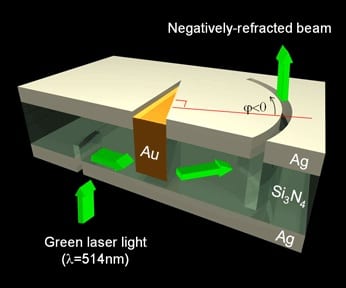 Support for solar energy is growing all over the world, which has increased the demand for more efficient energy systems that can meet the world’s growing power demands. Researchers from the University of California – Santa Barbara have been working on ways to address the issue of efficiency with solar cells. These researchers have taken a new approach to the matter of efficiency by focusing on plasmonics. Plasmonics is the use of plasmons, which are quasiparticles that are produced through plasma oscillations.

Plasmonics has been receiving a large amount of attention because of its potential to help produce highly-efficient solar energy technology. Researchers from the University of California – Santa Barbara have developed what they are calling a “radically new” plamonic solar cell that was literally grown rather than built. This solar cell is a free-floating plasmonic device that is capable of collecting solar energy and producing hydrogen gas, similar to the artificial leaf that was developed by researchers from the Massachusetts Institute of Technology.

Solar cell may be a boon for hydrogen fuel cells

Researchers suggest that their new solar cell could have promising implications for clean transportation and renewable energy in general. The solar cell can produce high amounts of electrical power in an efficient manner, making it a very attractive solar energy system, especially for those interested in hydrogen fuel. Researchers note that their solar cell could be used to produce hydrogen fuel in an efficient manner, simply due to the fact that the solar cell itself makes use of renewable energy provided by the sun.

Solar cell helps show off the possibilities of plasmonics

While the new solar cell has promising implications for solar energy and clean transportation, the technology is meant to show off the capabilities of plasmonics. Researchers believe that plasmonics can help produce highly effective renewable energy systems that are both inexpensive and efficient. Such energy systems could be exactly what the renewable energy sector needs to see adoption of clean power spike in the coming years.