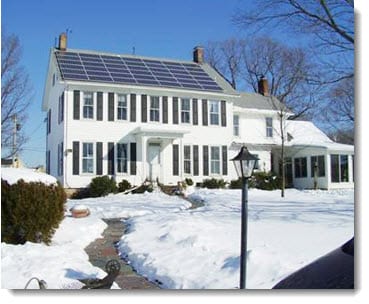 When it comes to alternative energy, the notion of living off the grid – completely detached from utilities companies and governmental influences on electricity – is an alluring concept.

Indeed, the idea of free energy is something that has attracted multitudes in the past. Nikola Tesla was, perhaps, the staunchest advocate of free energy during his time. However, given people’s reliance on electricity, the opportunity for profit far exceeds the altruistic motives driving the pursuit of free energy. As technology continues to advance, new ways are being found to circumvent the system and make use of the abundance of alternative fuels.

Mike Strizki, a civil engineer, claims to have found a way to store solar energy that could translate into a near infinite source of electricity. Strizki equipped his home in New Jersey with more than 150 solar panels. After being collected, the solar energy is used to generate hydrogen gas. Each of the panels funnels the gas to one of 11 hydrogen fuel cells stored miles away from his home. The hybrid system is entirely emissions-free and uses nothing but sustainable energy to operate.

What seems to be new technology is anything but Strizki says that the system has been in place since 2006.

Since then, he has not paid for any of the electricity he has used and has not released so much as an ounce of CO2. Strizki’s system nets him about $25,000 in savings each year.

Strizki notes that the technology he uses is not incredibly advanced. While the hydrogen fuel cell used to power his home was expensive, he only needed one. The solar panels were affordable and he could install them himself. He now stands testament to the viability of alternative fuel in a world that says such technologies have not yet reached a practical point.