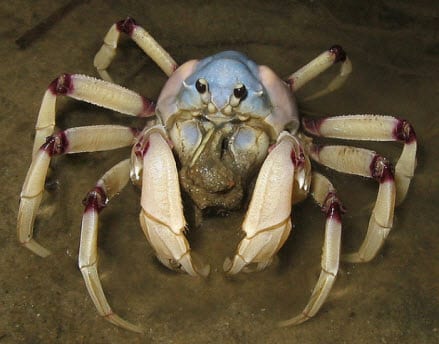 Latest in technology news may convert into alternative energy resource

Scientists from the Kobe University in Japan and the University of the West of England Bristol in the United Kingdom have discovered that swarms of soldier crabs (Mictyris guinotae per Wikipedia) mimic computational models. This discovery, the scientists developed, is essentially a living computer made entirely of crabs. Researchers believe that the phenomenon they have experienced with soldier crabs could pave the way for a new generation of highly efficient computers. Such computers would require no excessive amount of energy as they could, potentially, generate their own electricity.

Some of which contained hundreds of thousands of specimens – researchers concluded that, as a collective, the crabs practice some type of collision-based computing. The crabs could form swarms to conduct basic tasks which may have been too difficult for an individual to accomplish. Researchers note that the behavior of individual crabs depends heavily on its position within the swarm. Those toward the middle or rear of the swarm would act more passively while those toward the head of the swarm would be much more aggressive.

Researchers have constructed computer models that mimic their observations of the crabs.

During tests, they found that the models the soldier crab swarms shared undeniable and profound similarities. Scientists believe that this is the first step toward making high-efficiency, small computers a reality. These computers could change the way the world of technology news works, but researchers note that such products are still several years away from becoming a reality.

Scientists note that their discovery is tied closely to one of the foundational principles of biomimicry:

Natural systems evolve to become more efficient. They believe that this principle is most apparent in swarms of soldier crabs and that this can be used as a model to create a new generation of computers. These computers would, essentially, work together to be more energy efficient and effective in their tasks. The behavior of these computer systems would change depending on their position within the supposed swarm, becoming more passive or aggressive as needed.