An abandoned landfill in New Jersey could soon be a source of renewable energy.

What was once considered to be one of the most toxic dumps in the U.S. 30 years ago, the L&D Landfill located in South Jersey, which now sits idle and towers above a busy highway, will become a hub for solar power, reported The Philadelphia Inquirer.

The former dump site will be home to a large solar farm.

A section of the former landfill in Burlington County, which spans 200 acres of land, is now home to almost 42,000 solar panels. These panels have been carefully installed by 150 workers in recent months. The panels have been secured a few feet above the clay cap that shields the public from the hazardous waste that is buried below. 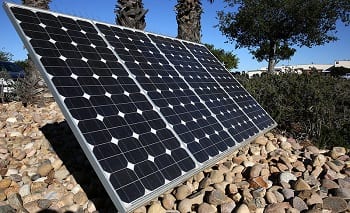 A Superfund site is one that is marked as being contaminated with hazardous substances and is tapped for priority cleanup and funding due to health concerns. The L&D Landfill was placed on the Superfund list in 1984. According to the Environmental Protection Agency, over 25 Superfund sites across the U.S. have solar farms.

As much as 12.9 MW of energy is expected to be generated from the solar power project.

The 12.9 MW (megawatts) of power is about enough electricity for 2,000 households. Hranicka said that “We’re repurposing land that has no productive use,” and added, “we’re bringing renewable energy to residents of New Jersey.”

According to Hranicka, the energy that is collected from the solar panels will be delivered directly to the grid, on site.

The project is set to begin harvesting the sun’s rays and converting them into energy next month. Although the idle landfill is a 200-acre area, presently, only a 53-acre section is being used for the solar project. That said, according to Hranicka, PSE&G are considering using more of the unused space in the future.

While the L&D Landfill is not the only landfill on which PSE&G operates solar farms, in terms of panels and output, it is the utility’s largest solar power farm and its only one located on a Superfund site.