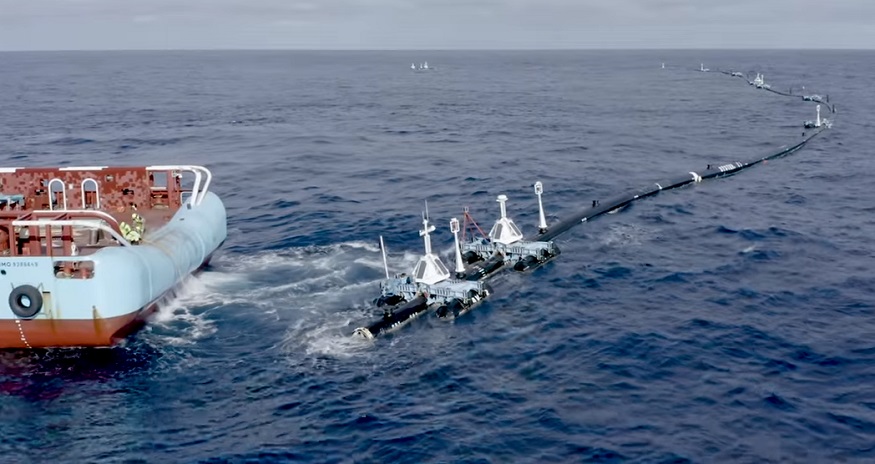 An upgraded floating boom is headed toward the Great Pacific Garbage Patch.

The Ocean Cleanup project founder, Boyan Slat, has said that after four months of repair, a massive floating bloom is being sent back to the Great Pacific Garbage Patch for a second attempt to help clean up some of the worst pockets of plastic waste in the ocean.

The plastic-capturing floating boom is an impressive 2,000 feet long.

The boom, which is 600 meters in length (approximately 2,000 feet long), is making its way back to the Great Pacific Garbage Patch, also known as the Pacific Trash Vortex. This patch of the ocean lies halfway between California and Hawaii and is a gyre of marine debris particles, mostly made up of floating plastic trash that primarily comes from Asia.

The U-shaped floating boom has been designed by Boyan Slat and his team at The Ocean Cleanup project to trap 1.8 tons of plastic waste without harming marine life.

The project first started as a crowdfunding campaign back in 2014, Hydrogen Fuel News reported. Since then, it has become more than just a pipe dream and the first floating bloom was launched in September of last year (2018), where it was towed from San Francisco to the Great Pacific Garbage Patch.

However, after four months at sea, constant waves and wind broke apart the device, causing the boom to fail at retaining the plastic it caught. Ultimately, it was removed for repairs.

Late last week, The Ocean Cleanup tweeted: “After only four months of design, procurement, and assembly, the crew is now on their way to the Great Pacific Garbage Patch with the upgraded system 001/B. Time to put it to the test.”

After only four months of design, procurement, and assembly, the crew is now on their way to the Great Pacific Garbage Patch with the upgraded System 001/B. Time to put it to the test. pic.twitter.com/wbUUvrihbh

The floating boom will communicate its position to The Ocean Cleanup project crew at all times.

The device has been fitted with with solar-powered lights, sensors, cameras and satellite antennas so that it can communicate its position to the crew at all times. This will allow a support vessel to remove the collected plastic every few months and transport this waste to land.

Marine biologists on board the support vessel during the projects first run, said that they did not observe the boom having any environmental impacts, The Guardian reports.

Scientists believe that the device’s plastic barrier, which is a 3-meter deep (10-foot deep) screen, functions like a coastline, trapping some of the plastic pieces while enabling marine life to safely swim under it.

According to Slat, he hopes that The Ocean Cleanup project will expand so that one day 60 of the floating boom devices can be deployed to remove plastic from our oceans’ surface.