A Nevada City wastewater treatment plant has reduced over 1 million gallons of water per month by recycling water.

According to officials, wastewater recycling is playing an important role in Nevada City’s efforts to conserve water. The city’s Water and Wastewater Treatment Plant’s reuse of purified sewage water, which it uses to run its operations, is having an extremely positive impact with regard to meeting the Californian city’s water conservation goals, saving nearly 1.4 million gallons of water each month.

The plant’s water conservation efforts contribute to 41% of water usage reduction by the city.

Howard Schmitz, chief plant operator at Nevada City, and his coworkers, began using reclaimed water in the summer to run plant operations. Since the summer, the treatment plant has processed and treated an estimated 390,000 gallons of sewage water per day. Schmitz stated that the plant saved 1,372,044 gallons of water monthly, reported The Union.

“Instead of using city water, we are using reclaimed water to run our operations here at the water plant. That’s what contributes to the nearly 41 percent of water usage reduction by the city of Nevada City,” Schmitz said.

This year’s wastewater recycling resulted in more than a 39% reduction in water usage compared to 2013. 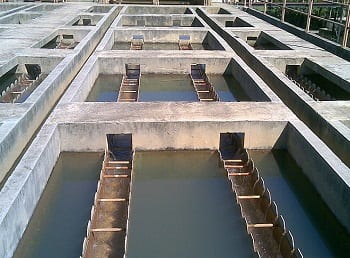 In regard to the plant’s efforts, Mark Prestwich, The City Manager of City of Nevada City, said that it’s a smart way for the city to reuse its water. “The more we reuse…the less we have to buy from Nevada Irrigation District,” he added.

Prestwich said that recycling wastewater is an endeavor to meet the state mandatory 25% water reduction target that was issued by Governor Jerry Brown in response to California’s ongoing drought.

The wastewater that is being recycled comes from the sinks, toilets, hoses and washing machines of residents, a recycling process that some refer to as “toilet to tap”. The reclaimed water is currently being used for cleansing basins, purifiers and for landscaping the vegetation at the plant.

Although the sewage water goes through a purification process that disinfects it and makes to clean and safe to drink, at this point, the recycled water is limited to the Wastewater Treatment Plant. According to Schmitz, not everyone is comfortable with the idea of drinking reclaimed water, but he hopes that wastewater recycling will eventually expand to the community.