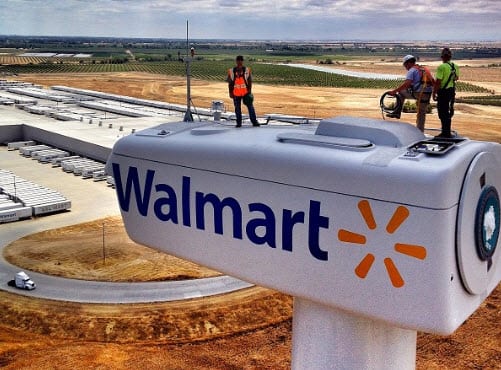 Retail giant Walmart has unveiled its first on-site wind energy project. The project will find a home the retailer’s Red Bluff, California, distribution center. The project is embodied by a single wind turbine, which boasts of a height of 265 feet. The wind turbine is manufactured by General Electric and will be able to provide a great deal of electrical power to the distribution center. This is the first time Walmart has embarked on an on-site wind energy project, but the retailer has shown support for various forms of alternative energy.

Based on information provided by General Electric, Walmart expects the new wind turbine to produce approximately 2 million-kilowatt hours of electricity annually. Foundation Windpower, a developer of on-site wind energy systems, will be responsible for the installation of the wind turbine as well as its management. As part of an agreement between the company and Walmart, Foundation Windpower will retain ownership of the turbine for the time being while Walmart makes use of the energy it generates.

The new wind energy system is expected to save the retailer a significant amount of money by cutting back on the fossil-fuels used at its Red Bluff distribution center. Fuel costs have been growing in the U.S., as have the costs of transporting this fuel from one location to another. On-site energy systems are beginning to grow in popularity in various industrial of business because of their economic potential. Walmart believes that wind energy, in particular, could hold a great deal of economic promise.

Wind energy has received attention from several governments around the world, but relatively few businesses have opted to make use of the power. Many large companies are opting to use solar energy systems as a way to reduce their environmental impact and save money on energy. Industrial companies have shown favor for hydrogen fuel cells.