Geothermal is not easy to find in the U.S. state.

Compared to the rest of America, electricity in Alaska costs two times as much and in some rural regions it can cost three times as much, which is why the state is seeking to stabilize some of these high costs with greener power sources like geothermal energy, but this renewable resource is proving to be a lot harder to discover, reported KTVA.

The hope is that the U.S. state will generate 50% of its electricity from renewables by 2025.

According to the Alaska Energy Authority (AEA), fossil fuels are the primary source of power in the state. Almost 58% of its electricity comes from gas, while oil provides approximately 15%. However, Sean Skaling, AEA’s programs and evaluation director and the overseer of Alaska’s Renewable Energy Fund, says that clean energy is a real possibility because in many cases it is becoming more cost effective compared to the infrastructure that already exists.

The mission of Alaska’s Renewable Energy Fund is to provide funding for renewable projects throughout the state. The hope is that by 2025, half of Alaska’s electricity will come from renewable power sources. Skaling said that “The biggest four projects that we see are hydroelectric, wind, biomass and heat recovery.”

The AEA reported that in 2011, hydroelectric power generated an estimated 20% of electricity in the state while wind energy was responsible for less than 1%.

Although a challenge, Geothermal energy could be a real possibility for Alaska. 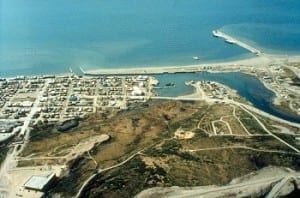 There are four potential geothermal hotspots in the state, which include the Southeast Hot Springs, the Interior Hot Springs, the “Ring of Fire” volcanoes, and Wrangell Mountains. However, discovering geothermal pockets is not a simple task and, Skaling said, they can also be costly to develop.

Skaling explained that just like any other renewable resource, when it comes to Geothermal, “You have to find the resource, find it in abundance, make the energy cost effective, which also means it has to be close to a population base.” Making it close to the population is another challenge that the state faces because there is more than one electrical grid. Alaska does not have many transmission lines and, Skaling added, nearly every community has its own separate diesel generation.

Nonetheless, the city of Nome hopes to build Alaska’s second geothermal energy plant to generate electricity for itself and this could help encourage further geothermal exploration and development in the state.