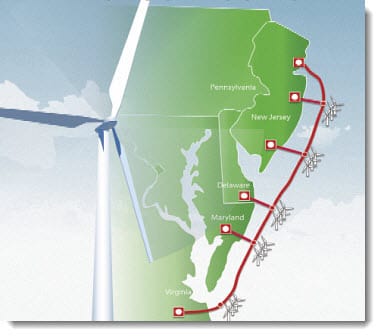 In October 2010, Google announced plans to support the establishment of offshore transmission lines that would carry electricity generated by wind turbines throughout the east coast of the U.S. The project has faced down several roadblocks in recent months, making significant progress toward becoming a reality. This week, the U.S. Department of the Interior declared that there was “no overlapping competitive interest” in the areas where the project is to be constructed. This marks a major step forward for the project and puts it several steps closer to being realized.

Wind energy has been gaining attention in the U.S., along with other alternative energies. Wind is considered to be a frontrunner in the country’s efforts to break away from fossil-fuel and foreign sources of energy. Wind energy installations have proven quite successful in parts of the country where strong winds prevail, but offshore wind farms have been receiving more focus in recent months. These wind farms are considered to be more effective because of the strong, unmitigated winds that are common throughout ocean regions.

The project is worth $5 billion and is backed by several companies, such as Google, Good Energies and the Marubeni Corporation of Japan. The project seeks to establish a transmissions line that will carry the electricity generated by offshore wind farms to sites located along the eastern coastline. This electricity will then be used to power homes and businesses in a number of different states. These offshore wind farms are expected to augment other alternative energy systems that will take root in these states.

The project must still make its way through a rigorous approval process before it can begin to take physical form. Federal agencies will conduct environmental reviews of the project to ensure that it will not have an extreme impact on the local ecology or disrupt the habitat in a profound way. This review is expected to take up to 24 months. If all goes according to plan, electricity may be transmitted as early as 2017.