The Canadian government is providing over $6 million to OpenHydro’s Fundy tidal project.

OpenHydro Technology Canada is receiving $6.35 million from the government for its Bay of Fundy tidal stream project, a project that has the potential to provide thousands of homes with renewable energy by harnessing the bay’s tidal power, and OpenHydro is considering Digby, Nova Scotia as a potential base for some of its tidal energy operations.

A group of turbines will fuel the performance and cost of a commercial tidal farm in harsh conditions.

The Fundy project is nothing new. OpenHydro first installed a 10-ton multimillion dollar tidal turbine five years ago on the floor of the Minas Passage. This is the narrow body of water that connects the Minas Basin to the Bay of Fundy. This test was the first of its kind in North America to determine if tidal power from the region of the world that is renowned for having the highest tides anywhere, could be harnessed to generate electricity. 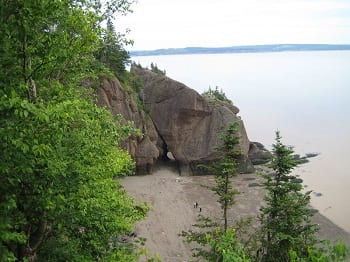 However, this initial test was short lived, because within three weeks of dropping 12 turbine rotor blades into the Minas Channel, all of them were demolished. James Ives, the CEO of OpenHydro admitted that the company had misjudged the bay’s energy and said that it was the only structural failure the company has ever experienced.

Now, OpenHydro is getting ready for another test this fall, and is set to drop two 14-meter-diameter turbines, each situated on a 1,000-ton base, into the Minas Channel. 1,000 tons is necessary because it will help to secure the turbine to the floor, preventing it from sliding across the sea from the huge pressure from the tide.

OpenHydro continues to be the lead company in the race to harness tidal energy from Fundy’s tides.

However, OpenHydro is not the only company to have received support from the federal government via its Sustainable Development Technology Canada fund to test tidal-powered turbines at the FORCE (Fundy Ocean Research Center for Energy) test facility located near Parrsboro, Nova Scotia. One year ago, Atlantis Resources Ltd. also received $5 million from the fund for its 1.5 megawatt test turbine, which the company says will be installed in the Minas passes near the end of 2016.

Although OpenHydro is not the only company interested in harnessing tidal energy from the Bay of Fundy, it is the first to move forward with its project. The company’s CEO, James Ives said that “OpenHydro is proud to have been the first technology installed in the Bay of Fundy, and we remain convinced of the potential of the region as a major source of clean renewable energy.”