The purpose of the renewable energy use will be for crossing oceans and delivering aid.

LTA Research and Exploration, the secretive and mysterious airship company owned by Google co-founder and former Alphabet President Sergey Brin, will use the biggest mobile hydrogen fuel cell in the world to power its disaster relief airship.

The company releases very little information about itself other than basic aerospace research intentions.

LTA (which stands for Lighter Than Air) Research and Exploration is an aerospace research and development company with a focus on the development and creation of “experimental and certified manned and remotely piloted airships.” Among the primary goals of this Mountain View, California- and Akron, Ohio-based company is to reduce the cost associated with modern airships. The purpose of those vehicles would be the delivery of humanitarian aid while simultaneously reducing greenhouse gas emissions and employing Americans.

Though the company rarely announces much in terms of detail regarding its plans and strategies, it is now planning to power a massive airship for disaster relief with the biggest mobile hydrogen fuel cell the world has ever seen. This was revealed by way of one of several job listings on the company’s official website.

The company is already listing jobs for the configuration of the biggest mobile hydrogen fuel cell.

The job listing describes the intention to configure a 1.5-megawatt hydrogen propulsion system. This would be used for powering a humanitarian aid airship while simultaneously turning transportation on its head. The job listing does not provide detail about the specs for the H2 system. However, a system that powerful would be enough to take a craft over oceans.

Even though airships are substantially slower than most other forms of air travel, jets in particular, they have the potential of carrying considerable amounts of goods and could land them virtually anywhere. 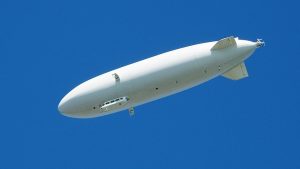 cells in the world would give these airships a vast range. Moreover, they are more appealing to this kind of craft as they are lighter than lithium-ion batteries and have the potential to be notably cheaper as well. This helps to explain why H2 is a renewable energy source in a growing number of aircraft projects worldwide.