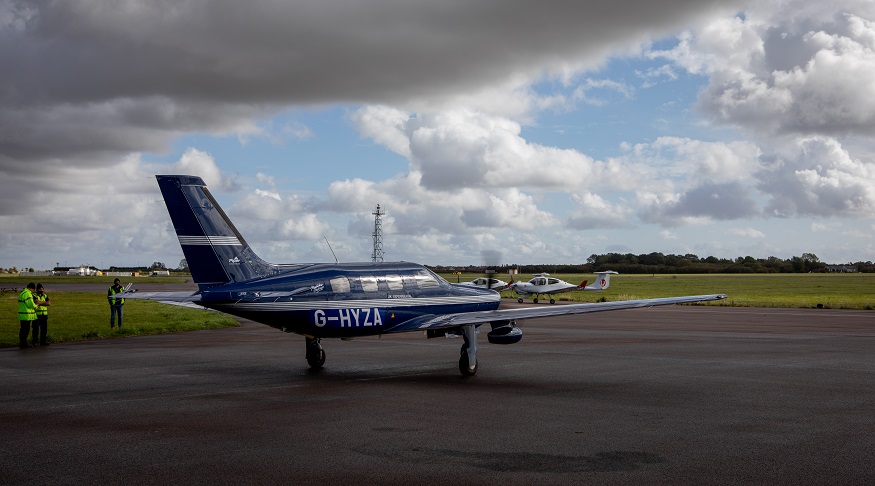 This represented an important step forward in the world of zero-emission commercial aviation.

The company’s Piper M-class hydrogen fuel passenger plane was retrofitted to combine H2 and oxygen for electricity production. During the maiden voyage, it taxied, took off, completed a full pattern circuit flight, and landed.

According to the ZeroAvia, this first flight was a “hydrogen fuel cell powered flight of a commercial-grade aircraft.” It called the moment a “world first.” That said, it’s important to point out that this is not the only H2 fuelled craft that is capable of hosting passenger flights.

In 2016, a four-seater HY4 aircraft took its own inaugural flight, leaving from Germany’s Stuttgart Airport. That was a successful trip as well. The HY4 was developed by German Aerospace Center researchers, in collaboration with “industry and research partners.”

This most recent hydrogen fuel passenger plane flight was from England’s Cranfield Airport.

ZeroAvia has a research and development site at that airport, which is located 50 miles north of London. Cranfield University owns the airport used for the flight.

“While some experimental aircraft have flown using hydrogen fuel cells as a power source, the size of this commercially available aircraft shows that paying passengers could be boarding a truly zero-emission flight very soon,” said ZeroAvia CEO Val Miftakhov.

The company is leading the HyFlyer program with project partners such as the European Marine Energy Centre (EMEC) and Intelligent Energy. The HyFlyer program is backed by the British government and was described by EMEC as seeking “to decarbonise medium range small passenger aircraft by demonstrating powertrain technology to replace conventional piston engines in propeller aircraft.”

With this flight of the hydrogen fuel passenger plane complete, the next step in the HyFlyer project will have ZeroAvia working to complete a longer flight. This will involve flying between 250 and 300

miles from the Orkney Islands. That archipelago is located off mainland Scotland’s north coast. The goal is to complete that trip before the end of the year.