How can city design help with sustainable travel?

The future of cities has to be more sustainable if we want to stand a chance at repairing the effects of climate change on our planet. Cities are notorious hotspots for air pollution, as cars sit in traffic jams and churn out dirty air. Not only is this bad for the planet, but it’s bad for our health, too.

Whilst some cities are trying to push for more sustainable transport solutions, in many cases, the design of the city is what stops planners being able implement changes as successfully as they might have hoped. But why is that? What would a city need in order to support sustainable travel? We take a look.

Cycling is a great way to keep active, and e-bikes allow commuters to travel longer distances where you might usually take a car, rather than walk. But for many cyclists, the risk of cycling on busy inner-city roads is too dangerous for them to swap to cycling to work. Added to this is the lack of places to safely lock up bikes, unless their company specifically offers secure bike storage.

Cities like Copenhagen seem to have got it right though, and there are plenty of lessons to take from their approach. Dedicated, wide bike lanes allow cyclists to overtake each other without having to swerve onto the road, and there are bike traffic lights that allow cyclists to go a few seconds ahead of the cars. This means that cyclists can cross junctions with a lower risk of getting hit by a driver who isn’t paying attention. There are also plenty of public bike racks, and pop up centres to help with repairs.

Bus routes that meet the needs of users

In many cities, there tends to be a set of buses that serve the city centre, and then another set that serves the suburbs. But women in particular tend to ‘trip chain’, where they need to get on more than one bus route in order to get to work in the centre of town, and then pick up their child at nursery in the suburbs, for example.

Many bus companies will charge someone a fee per route, rather than for a certain period of time, meaning that people who need to trip chain often end up paying higher fees. For those who have access to a car, this may mean that they opt to drive instead, as it ends up costing less, yet has a far greater impact on the environment.

Many people avoid walking to their destinations as they feel it’s dangerous to walk along busy city centre roads. Parents with young children and the elderly in particular may benefit from pedestrian zones that allow them to get to their destination without the risk of cars in rush hour.

Creating pedestrian zones in the centre of a city also makes it more inconvenient for drivers to travel short distances, as they have to drive around the restricted zones. This reduces air pollution for pedestrians, and may also mean that drivers choose to swap their vehicle and walk for speed and convenience. 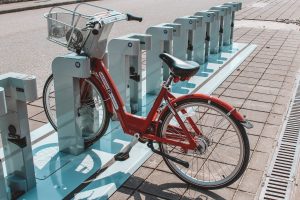 Bikes are zero emission and occupy only a fraction of the space of motor vehicles. The availability and technology of bike share locations have evolved since it first began in Amsterdam in the mid-1960s. Beginning with just a handful of bikes on the streets, bike share has now transformed into a commercial highly sophisticated global industry. With promising initiatives for electric assist and hydrogen bikes which are now fueling renewably powered by a bike share system. These systems are not cheap but they offer excellent value proposition to the end user and are more likely to act as a competitive alternative to car use. Thereby helping to make cities healthier more sustainable and productive.