Automotive group announces that Beijing has plans for clean vehicles

The Beijing Automotive Group has announced that the Beijing government will be pushing for more clean vehicles to come to the city’s roads this year. The city has been showing aggressive support for clean transportation in recent years, hoping to cut down on the emissions that have choked it for some time. Supporting clean transportation aligns with the city’s overarching renewable energy goals, which have also begun to take root in other cities throughout China.

According to the Beijing Automotive Group, the Beijing municipal government plans to quadruple the number of clean vehicles that are currently part of the city’s vehicle fleet. This will bring some 30,000 clean vehicles to the city, which will be used for various purposes by the government. The municipal government also intends to increase the quota that governs the , encouraging automakers to produce more of these vehicles every year. 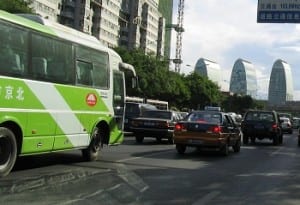 Air pollution has become a serious problem for Beijing and the emissions that constantly cloud the city have been linked to serious health issues among its residents. The city aims to cut down on air pollution by targeting the transportation sector, where much of the emissions responsible for ailing health come from. In order to accomplish this, the city has been bolstering its electric charging infrastructure to support electric vehicles and has limited the number of conventional vehicles that can be produced and sold every year.