A new report says air pollution from hydraulic fracturing can cause an extensive range of health problems.

A report that was released earlier this week from the Natural Resources Defense Council (NRDC) said that Americans who live near fracking sites (either oil or gas drilling wells), are exposed to air pollution related to the mining practice, which includes exposure to toxic chemicals like formaldehyde and benzene.frack

The NRDC claims the pollution is linked to a minimum of five serious types of health problems.

Miriam Rotkin-Ellman, a senior scientist of the NRDC, said that “The health risks from fracking are not limited to what’s in our drinking water – oil and gas operations are also poisoning the air we breathe.”

The air contamination, resulting from the drilling process that injects copious amounts of water mixed with chemicals and sand deep into the earth to break up shale deposits and extract gas and oil, causes several serious health problems. According to the NRDC, at least five of these types of problems include birth defects, blood disorders, respiratory problems, nervous system impacts and cancer. This is troubling news considering an estimated one in four Americans live within a mile of a gas or oil well.

For instance, in regard to birth defects, it was found that in certain regions of Colorado where gas and oil activity is highly concentrated, mothers living close to many gas and oil wells were 30 percent more likely to have babies suffering from heart problems.

Studies continue to reveal the dangers of fracking but the oil and gas industries still claim the practice is safe. 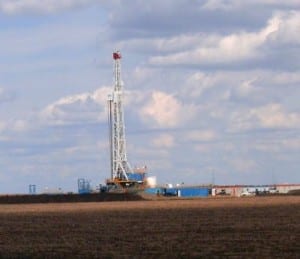 A study published earlier this year in Environmental Health Perspectives, a peer-reviewed open access journal published by the National Institute of Environmental Health Sciences, found that people who live near natural gas well are more than two times as likely to report skin and upper-respiratory problems compared to those who live farther away.

However, the gas and oil industry states that hydraulic fracturing is a safe and effective method for boosting the American economy and also lowers the nation’s dependence on foreign energy sources.

Be that as it may, Rotkin-Ellman stated that while the impacts of fracking are continuously swept under the rug by the industry, “the science keeps revealing serious health threats — for workers, families living nearby and entire regions with heavy oil and gas activity.”