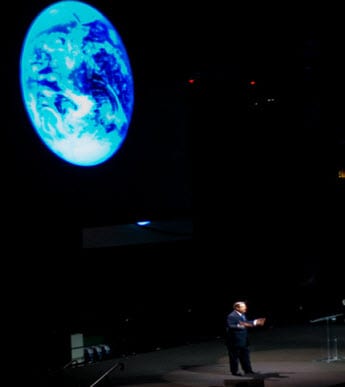 Climate change is a subject riddled with controversy and angst.

Dubbed as a pseudoscience, climate change is often rejected by the scientific community at large on the premise of the theory’s supporting evidence being impossible to replicate. Disregarding the opposition they face, advocates of climate change assert that the environment is quickly approaching a breaking point and that it may have disastrous effects on the whole of humanity. Former Vice President Al Gore is one of the champions of climate change and has taken the issue to heart.

Gore is, perhaps, most known for his controversial film “An Inconvenient Truth,” which depicts climate change as a real, man-made phenomenon. His environmental efforts eclipse his political past to the point that he has now become synonymous with climate change. Earlier this year, Gore launched a new initiative aimed at revealing the supposed truths behind the climate crisis.

The initiative is called the Climate Reality Project.

As part of the Climate Reality Project, Gore has been traveling the world hosting a series of presentation in which he notes the importance of environmentalism and a shift away from oil. Thus far, Gore’s attempts at advocacy have been met with scorn from the scientific community and even other environmental groups.

The environmental impact of Gore’s tour around the world often overshadows his message, making it more difficult to keep up his appearance as champion for the environment.

Whether climate change is a man-made phenomenon or a natural one continues to be a subject of much debate. The simple fact remains, however, that there are changes occurring in the world’s environment. Some of these changes, such as the growing energy crisis throughout the world, are unlikely to be solved through extensive debate. Rather, such problems might have their solution in alternative technologies that are far better for the environment than anything else. As it stands today, the debate over the merits of climate change have bred only inaction.