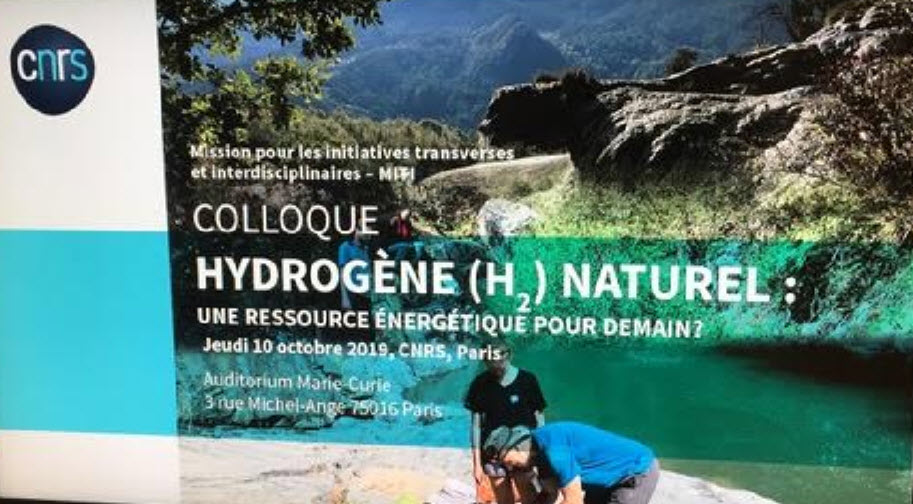 The natural hydrogen conference was organized by the CNRS

The French National Center for Scientific Research took place on October 10th 2019 at its headquarters in Paris. This was the first event of it’s kind and attracted much more attention from the academia and industry as what was initially expected by the committee. About 150 attendees were present, including representatives from the French National Assembly responsible for hydrogen energy programs.

Natural hydrogen has been known to Earth scientists for a long time now.

It has been discovered at different geologic environments but until today it did not attract large attention because often such discoveries were considered exceptional and rare. However, things have changed with putting into production the first hydrogen well in 2012, which is producing since that time 98% pure hydrogen.

In the same period, it was discovered that some areas on the Earth are seeping large quantities of hydrogen gas.

Such examples motivated researchers to look into this topic more closely. What was found during the past few years is there’s an abundance of natural hydrogen was largely underestimated. During the presentations of the conference it was stated that all known sources were re-evaluated upwards.

is it possible to produce this new resource? This is especially attractive, considering that natural hydrogen is not coming from fossil sources, but rather from inorganic reactions happening in the Earth’s crust and mantle at the present time. Two major possible sources include water reactions with minerals and degassing of the Earth interior, which could be rich in hydrogen accordingly to numerous studies. Therefore, natural hydrogen is carbon free and sustainable. It may also be considered renewable resource by comparison with the geothermal energy.

we’re dealing with the primary source of energy, where H2 is not a vector like it’s currently seen from the point of view of hydrogen economy. No energy is required to produce natural hydrogen other that to capture it in the ground. This has a significant impact on the cost of produced hydrogen.

Estimates vary, but researchers agree that geologic hydrogen could be cheaper…

than the cheapest hydrogen of today, which is produced by steam methane reforming. This is understandable because one step can be removed from the value chain of hydrogen production: instead of extracting natural gas (i.e. methane) and transforming it to hydrogen via steam reforming it is possible to extract hydrogen directly.

it was reported that two dozen wells were drilled in Africa and the first exploratory well has been completed in the USA this year. More studies are required to characterize the reserves and to find the best approach to extract this new source of energy. We may expect a lot of new discoveries will take place in the coming years.