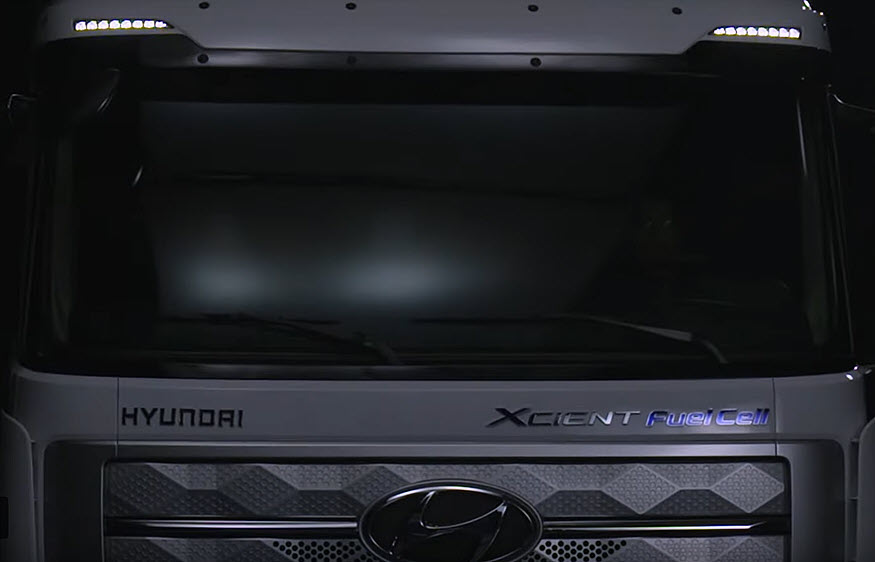 A multi-million dollar project integrating hydrogen technology into 50 trucks will complete this year, marking the first such green fleet in operation in the world.

The Hyundai Xcient Fuel-Cell trucks – which will transport supermarket deliveries and other goods across Switzerland – are equipped with bespoke systems from Luxfer, the world’s largest manufacturer of high pressure composite and aluminum cylinders.

Hydrogen powers the 19-tonne vehicles thanks to more than 400 Luxfer G-Stor™ H2 hydrogen cylinders manufactured in Luxfer Calgary, Canada and assembled from Luxfer’s UK base in Nottingham. Their European arrival was celebrated with a livestream digital premiere on 14 October 2020.

Since development began on the landmark project in Feb 2019, the Luxfer Hyundai design team have developed the framework and pipework for seamless integration into Hyundai’s vehicles, all adhering to stringent quality and safety regulations.

Mark Lawday, a Director at Luxfer Gas Cylinders, said: “We’ve been working with Hyundai for around ten years on prototypes, as Hyundai is hugely committed to hydrogen power. Our role is to provide the knowledge of a complete fuel system to bring their ideas to life. There is significant interest in hydrogen and CNG (compressed natural gas) across the world, and Governments are now committing to cleaner transport technology as a route to meeting zero emission targets.”

The Hyundai H2 Xcients were manufactured in South Korea and a number are already in operation in Switzerland, where they are leased out by Hyundai’s joint venture with H2 Energy to Swiss retailers and logistic companies. The final systems are nearing completion and anticipated to be installed to trucks that will join the fleet later this year.

Each feature a 190 kilowatt fuel cell comprised of seven high-pressure tanks holding around 35kg of hydrogen. This provides a long distance range of about 400km before refueling is required, which far surpasses the capabilities of vehicles powered by electric.

Hyundai is investing heavily in hydrogen, planning to put 1,600 hydrogen trucks on Swiss roads by 2025 and set to launch similar projects in other European countries as well.

“It is not enough to produce a truck” said Mark Freymueller, chief executive of Hyundai Hydrogen Mobility (HHM). “You have to take care of the entire ecosystem, find like-minded partners and show this all makes sense for the customer.”

Luxfer anticipates that H2 will become increasingly attractive for heavy goods transportation, as the cost of producing clean fuel drops and greener alternatives to diesel are supported with funding.

Mark Lawday explains: “Switzerland is an ideal market for hydrogen-powered trucks, thanks in part because the country generates more than half of its energy from hydropower, so if this can be used to generate the hydrogen then it completely eliminates emissions.

“There are a number of benefits hydrogen can deliver over other low emission alternatives, such as battery electric vehicles (BEV).  Hydrogen fuel cells can generate more power when pulling heavier loads uphill than an equivalent sized battery, and offer a greater range.

“Ultimately, hydrogen will be more economically viable than BEV for truck fleets specifically because of the faster fuelling times. Hauliers cannot afford to have their stock laid up several times per day charging, and the burden that simultaneous charging of a complete fleet puts on the local electricity grid becomes cost prohibitive, so that’s where hydrogen is the best solution.”

A business unit of Luxfer Holdings PLC (NYSE:LXFR), Luxfer Gas Cylinders was commissioned by Hyundai thanks to its track record of designing and manufacturing thousands of gas fuel systems each year. In fact, Luxfer recently expanded its hydrogen facility in Nottingham, to meet the increased demand for alternative fuel solutions for the transport industry.

The Hydrogen Council estimates there will be 50,000 hydrogen-powered buses and 350,000 hydrogen powered trucks on the world’s roads by 2030.

Luxfer is manufacturing many hydrogen vehicle for the UK, including the world-first hydrogen double-deckers that arrived in Aberdeen in early October. Similar schemes featuring Luxfer expertise planned in London, Birmingham, Liverpool and Brighton.

In rail, Luxfer’s G-Stor® H2 hydrogen cylinders also fuel the UK’s first full-sized hydrogen powered train, which was launched in 2019 and was tested on the mainline network earlier this month. It will offer a range of around 600 miles, powered solely by hydrogen.

Luxfer Gas Cylinders (www.luxfercylinders.com) is the world’s largest manufacturer of high-pressure composite and aluminum cylinders. More than 70 million Luxfer cylinders in service around the world have an exemplary record for dependability and safety in a variety of applications, including firefighter and first-responder life support, medical, fire extinguishers, alternative fuel, specialty gas, beverage, aerospace, inflation, scuba and performance racing. An operating company of Luxfer Holdings PLC (NYSE:LXFR), Luxfer Gas Cylinders is based in Riverside, California, and has manufacturing facilities in the U.S., England, Canada, China and India. For more information on Luxfer Gas Cylinders visit: https://www.luxfercylinders.com/.