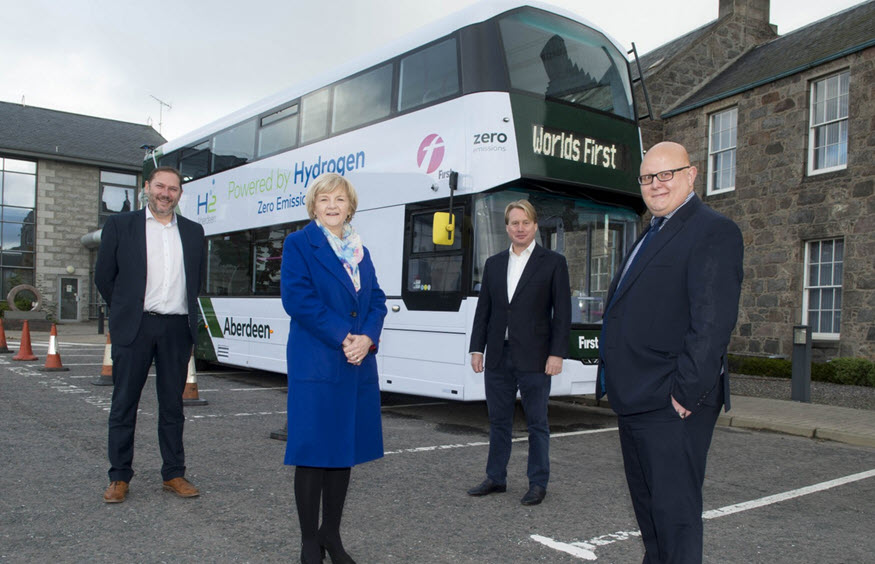 The Ballymena-based Wrightbus has delivered to the Scottish city well known as an oil company home.

Wrightbus has delivered the first hydrogen double decker bus in the world to Aberdeen, Scotland. This is even more meaningful as the city is best known for being the home of some of the leading oil companies on the planet.

Wrightbus was recently purchased by Jo Bamford, son of Anthony Bamford, chair of JC Bamford Excavators. Until then, it had been family owned and was facing severe financial challenges, having been placed in administration in 2019, immediately suffering 1,200 job losses. Prior to that, it had enjoyed some of the greatest manufacturing successes in Northern Ireland. Bamford’s purchase acted as a rescue for the company.

The hydrogen double decker bus fleet delivered to Aberdeen will become one of the largest H2 powered bus fleets in the world.

This is a major move for the newly Bamford-owned Wrightbus, which also manufactures electric buses. The new focus on H2 is part of a strategy to help the company to sidestep the risks associated with charging and range-anxiety. The reason is that H2 refuels in a way that is comparable to petroleum gas or diesel.

Along with the ease and speed of refuelling, a hydrogen double decker bus is zero-emission.

“When it comes to zero emissions the most difficult thing to change is human behaviour,” said Jo Bamford. “We’re creatures of habit, so if you can do something that mimics how we use transport today I think you get mass adoption.” Bamford sees considerable potential for H2 in public transport when compared to battery electric vehicles, which require changes to existing timing and strategies for both range and recharging.

The UK has been looking into other opportunities using H2 for public transportation. Earlier this month, the first hydrogen fuel cell trains were trialled in the United Kingdom. They are expected to begin running with passengers before the close of 2022.

According to Bamford, the cost of running those vehicles will only decrease over time. “We can fill it up at the same cost and it has the same running costs pretty much as a diesel, bus but the capital cost is twice as expensive,” said Bamford. “With a bit of volume, we can get the cost down to the same.”