The Ford F150 Lightning looks to be an excellent truck in all but one regard: its range. It’s advertised to be only 300 miles; it will probably be even less much of the time. Worse, pulling a travel trailer will further reduce the range, making it inept at recreational towing. Let’s fix that by removing the ton of batteries, replacing it with hydrogen gas and a fuel cell.

Reasons to be enthusiastic about the Lightning:

But – and it’s a real concern – its stated range appears to be optimistic for several reasons, and is likely to be insufficient for important applications.

One reason: Temperature problems. Tests by AAA of battery-powered vehicles show a 40% range reduction at 20 degrees F with the heater running, and a 17 percent reduction at 95 degrees when using the A/C. The battery-powered Lightning’s true range may be significantly less than 300 miles when the climate’s not cooperating.

Then, there’s the towing problem. Towing prowess is why many of us buy trucks. My 2019 F150 is a towing pro, but its gasoline mileage drops from the low 20’s to around 12 mpg when hauling our mid-size travel trailer – that 50% drop is typical for many rigs. The range of any EV will be similarly reduced – towing requires pulling energy from the battery much more rapidly. The oversized gasoline tank in our 2019 truck gives us 400+ towing miles before refueling, but it’s unlikely that Ford can squeeze much more battery into the Lightning. The battery weight is already nearly twice that of a Tesla’s, and we’d need up to several times the current amount of available energy to get to a decent towing range.

Combine AAA’s temperature-related reductions with the trailering hit, and a Lightning’s range may be much less than advertised, in important situations. Here are Jalopnick’s thoughts on the subject. They are not optimistic.

So: As an around-town truck, especially for contractors who need electricity on the job, the battery-powered Lightning’s going to be great. But, optioned to $60k++ and with that true self-driving feature, it should also be a long-distance cruiser and towing machine.  It’s not.

What’s a pickup to do?

Suggestion: Ford should propel the Lightning with hydrogen rather than a ton of batteries. The “LightningH” would still be an EV, but with better range.

How much better? Let’s go figure:

First, let’s replace the full-size under-bed spare with a pickup-quality compact tire. Unless you plan to travel the far and scraggly peaks, a donut’s fine – it’ll get you to the tire shop. Store the smaller spare in the “front trunk” and there’s still room up there for a sizeable hydrogen storage tank. The “frunk” has 14 cubic feet (https://tinyurl.com/cbcxbrsw), 100 gallons, of volume available. Let’s install a 70 gallon hydrogen storage tank up there, allowing room for that spare tire and a carbon fiber high-pressure tank wrap.

Then – let’s remove the batteries and store hydrogen in their place, in three, 9’ long 12” diameter cylinders. We can fit about 90 gallons of high-pressure tankage there, giving us a total of 160 gallons of hydrogen storage.

A hydrogen-powered electric vehicle uses a fuel cell and control electronics to produce its electricity. It also needs a relatively small (a few kWh) lithium battery to start things up, smooth out power delivery and recapture energy while braking. There’s room for that gadgetry in back, where the full-size spare tire used to hang out.

Now – A helpful data point: The 2021 Hyundai Nexo hydrogen-powered SUV stores 6.3 kg of hydrogen in 41 gallons of tankage. Our 160 gallons will handle 3.9 times that amount, storing more than 24 kg of hydrogen.

How far will that take us? We have a key clue: The Forbes Wheels article estimates the current Lightning’s battery capacity at around 165 kWh. That powers its 300-mile advertised range. We can use that value to estimate our LightningH’s abilities:

A 60%-efficient fuel cell can extract about 24 kWh from a kilogram of hydrogen, so the 24 kg in our LightningH will produce about 580 kWh. That’s 3.5 times the energy available in the current Lightning’s battery — it will provide at least 3.5 times the current range.

Towing will reduce that by perhaps 50% so the truck should tow for ~500 miles. And, we haven’t yet taken credit for replacing 2000 lbs of batteries with a few hundred lbs of hydrogen gadgetry. Lighter is better, so expect even more range improvement.

Should we correct for some of the cold or hot weather issues that decrease range in battery EVs? A test in Switzerland provides an indication: A hydrogen-powered Hyundai Nexo handily outperformed a battery-powered Tesla Model S in the chilly Swiss mountains, confirming that cold shouldn’t reduce hydrogen energy availability. For now, let’s just assume that other LightningH energy losses (from A/C use or cab heating) are countered by replacing that ton of batteries.

Bottom line: The hydrogen-powered truck should have better range than my gasoline-powered F150.

That works for me.

Range problem solved. Our LightningH will be a hydrogen highway cruiser!

This is just a quick estimate showing how the F150 Lightning’s range could be improved using hydrogen fuel. The truck looks to be an excellent platform, but it really needs that mileage stretch. Given the assumptions I’ve made here to get to a result, please be aware that “your mileage may vary” when more info arrives.

Also: This scenario assumes that there will be plenty of hydrogen gas stations to refuel our new truck. That’s certainly not true at the moment but recall that we quickly moved from horses to Fords, back when there were no gasoline stations anywhere. Necessity bred stations back then; I think it will again, in the same way that Tesla is of necessity flooding the planet with battery Superchargers. We’ll consider this in future articles, but it’s important to recognize that hydrogen can be generated at the gas station itself using only electricity, water and a gadget called an electrolyzer. Hydrogen can be produced and stored locally whenever the electrical grid’s load is light, or when wind and solar are producing more energy than customers can use (that’s already happening). Hydrogen gas stations will become an integral part of our new, smart grid. They’ll be important energy buffers as we move to a green all-electric world. 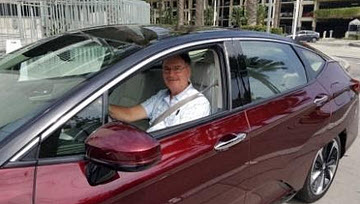 The Author: Dr. H. Robert Meyer, seen here driving a hydrogen-powered demo at a SEPA energy conference, is an environmental scientist with decades of experience. After serving as a Navy Officer, he began his career at the Oak Ridge National Laboratory then moved on to run large projects around the country. His background in physics, environmental protection and alternative energy helps unravel the challenges associated with converting a planet to all-electric. His website at https://poweringaplanet.com is focused on the tough-to-grasp size of the CO2 reduction problem — the effort required to reverse climate change is not yet widely understood. We need to drastically ramp up the installation rates of green energy and its backups to get to zero emissions before time runs out.