The country is increasing its clean energy and eco-friendly efforts.

Recently, a new law passed in France requires all new buildings built in commercial zones to be partially covered by plants or solar energy panels to make them more eco-friendly and to help reduce the heat island effect that buildings have on cities.

The French Parliament limited the initial proposal made by French environmental activists.

Originally, environmental activists in the European country wanted all new buildings to be fully covered by foliage, but government officials believed that this would be asking too much of businesses and decided on a compromise, passing a law that would make it so businesses would be required to partially cover the roofs of their buildings either in green plants or by installing solar panels. 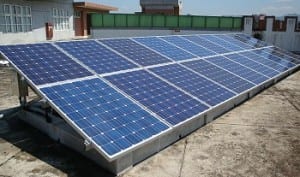 Foliage on top of a building, which may include trees, shrubs or other flora, provides an array of environmentally friendly benefits. For starters, it reduces the heat island effect in cities, a problem that occurs in urban regions due to all of the buildings and concrete, which leads to these regions becoming dry and impermeable, making these areas warmer than the rural surroundings.

Foliage on roofs also helps to improve building efficiency, filter air pollution, and decrease the amount of storm water that flows into sewer systems. In addition, green roofs provide birds with a place to nest and can also lower the amount of energy that is required to cool a building in the summer and heat it in the winter.

While this new law is likely to only help strengthen France as a leader in green roofs in Europe, it will also help to improve the country’s solar energy efforts. Currently, France derives about 75% of its energy from nuclear power. According to Think Progress, the country’s solar power adoption is slow growing, having only five gigawatts of PV (photovoltaics) installed as of the summer of 2014.

However, whether French businesses choose to cover the rooftops of their new buildings with greenery or they choose solar panels to generate electricity from solar energy, France’s new law has definitely taken the nation in a cleaner direction.