The United Kingdom’s first free cigarette recycling program, known as the Cigarette Waste Brigade, was recently launched and will help to deal with the massive amount of cigarette waste that is dumped into landfills. The program is the result of a partnership between recycling company TerraCycle, and tobacco manufacturer Japan Tobacco International, reported BusinessGreen.

Cigarette waste has become a serious problem in the UK.

Currently, billions of cigarette butts are either dumped into landfills or on UK streets. According to the Industry Council for Packaging & the Environment (INCPEN), cigarette butts accounted for more than 35% of the UK’s litter last year. The reason why this is a major issue as far as waste is concerned is cigarette butts are non-biodegradable and can take decades to break down in the environment. Furthermore, they contain carcinogens, another notable concern. 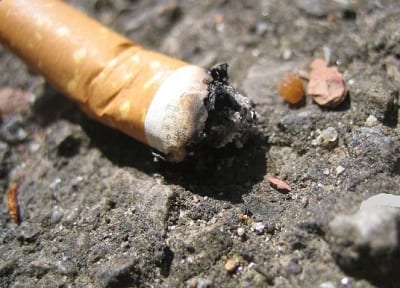 Anyone over the age of 18 in the UK can participate in the cigarette recycling program.

Groups, workplaces and any individuals over the age of 18 will be able to take part in the free recycling program. Participants are simply required to collect their cigarette or cigar butts and any other related waste (ash, used and unused cigarette filters, inner foil packaging, rolling paper, and outer plastic packaging) and send it to TerraCycle.

Most of the cigarette waste will be recycled into a range of plastic products, for instance, delivery pallets, while remaining waste, such as paper and tobacco, will be composted.

This is the UK’s first free cigarette waste recycling program. However, it is the ninth country to introduce such a program. TerraCycle runs similar programs in the United States, France, and Japan, among others.