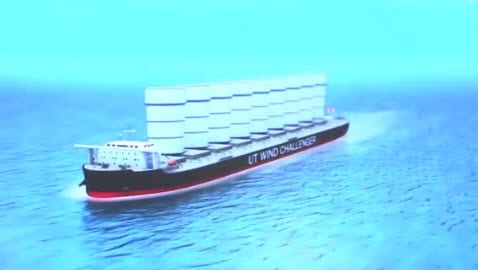 Slightly untraditional sails may be the key to clean sea transportation

Ships have not required sails in order to traverse the ocean since the Industrial Revolution. Today, the largest cargo ships in the world require nothing more than powerful engines to push them forward. These engines, however, produce large amounts of CO2 gas, which is a contributor to climate change. The science, technology, and alternative energy communities have worked for years to find an alternative to these high-polluting engines with modest success. Researchers from the University of Tokyo believe that the answer may lie in sails.

Metal sails could be viable alternative to high-polluting engines

Researchers have developed a new metal sail system that can be used to drastically reduce the pollution emitted by conventional engines. Professor Uzawa Kiyoshi demonstrated how the sails would work during the Sea Japan trade show in Tokyo last week. The sails can reach a height of 164 feet and are 65 feet wide, and they are made of an aluminum-plastic fiber, which is resilient and flexible. When the sails are raised, they can capture strong wind currents and pull giant freighters forward. The sails can be lowered in events of turbulent weather.

Sail system could help lower the cost of energy for freighters

According to tests conducted by the University of Tokyo, these metal sails could significantly reduce the cost of fuel for their freighters. Professor Kiyoshi estimates that cargo vessels could see a 25% reduction in energy costs by employing the metal sail system. The concept of using sails to cut costs of sea transport is not new. Similar systems have been tested in the past, but not have been as successful as expected.

Large scale tests to begin within the next few years

Researchers have conducted small-scale tests of the system only. Professor Kiyoshi hopes to build a large prototype system within the next few years to examine the performance of the system in a more practical way. Researchers will collect data produced by these tests and use it to improve the metal sail system. Professor Kiyoshi believes that the metal sails could show how viable wind energy is in terms of ocean-based transportation.

Scientists confirm that wind turbines have an effect on the environment