A company from the Netherlands harnesses and uses electricity from live plants.

Netherlands-based company, Plant-e, has discovered a way to generate and use electricity from living plants, and has used this green energy that they have harnessed to power streetlights, cell phone chargers, and Wi-Fi hotspots. The company even utilizes their plant power technology to run their headquarters in Wageningen.

The live plant power project had its first successful debut back in November of last year.

When it was first debuted near Amsterdam in November 2014, the project, which is called “Starry Sky,” demonstrated the company’s electricity discovery when they lit up over 300 LED streetlights at two different locations.

Founded back in 2009, Plant-e began as an offshoot from the department of Environmental Technology of Wageningen University. The company’s primary focus is to develop products that run off of electricity generated by living plants. Their technology has enabled them to create electricity from just about every site where plants are able to grow. 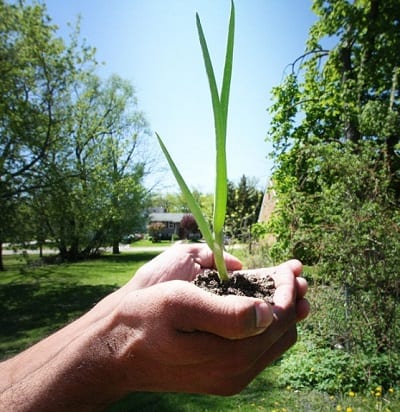 The green energy technology is based on natural processes and does not harm the plant or its environment.

According to information on the official Plant-e website, through photosynthesis, organic matter is produced by a plant. A portion of this organic matter is utilized for plant-growth, but a large part of it cannot actually be used by the plant and is excreted through the roots into the soil. Naturally occurring micro-organisms that surround the roots break down the organic compounds to obtain energy from them.

“In this process, electrons are released as a waste product. By providing an electrode for the micro-organisms to donate their electrons to, the electrons can be harvested as electricity. Research has shown that plant-growth isn’t compromised by harvesting electricity, so plants keep on growing while electricity is concurrently produced,” the company’s site states.

While such a discovery certainly opens up the doors for a new kind of green-powered future, such as homes being powered by surrounding plants or tree life, this technology is still a long way off from being commercialized.
The primary problem is that the amount of energy that can be generated isn’t sufficient enough to make this plant-power idea a reliable commercial product. Be that as it may, the company’s green energy technology continues to be promising. After all, Plant-e’s headquarters is powered by the electricity from live plants and the company is already selling products that enable people to harvest energy from plants.