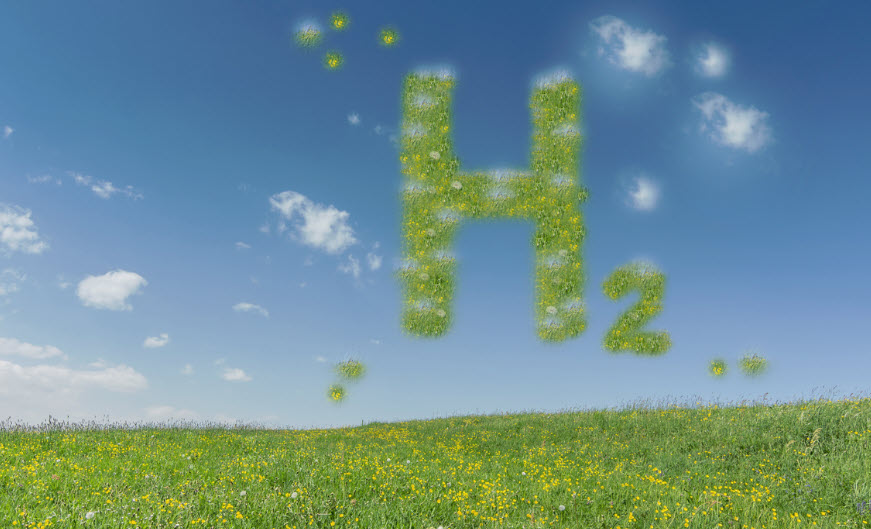 Decarbonizing the energy sector is a mega trend with significant momentum behind it.

The European Union (EU) and the United States are both aiming for net-zero emissions by 2050, and other regions are following suit and publishing roadmaps toward eliminating carbon emissions. And in the state of California, an even more ambitious goal is set to achieve zero-emission electric power by 2045.

This effort is going to involve a number of fuel sources and technologies, but hydrogen is an important component to the overall effort. In 2020, more than $150 billion in green hydrogen projects were announced globally.

There are three types of hydrogen – grey, blue and green, each color referring to the level of pollution generated as the hydrogen is created. Grey is the most polluted, where fossil fuels are burned to produce the hydrogen. Blue is somewhat better and is generally a mixture of processes, but there is still some pollution as a result of hydrogen production.

Now there is growing pressure to produce green hydrogen, or hydrogen from renewable energy sources versus that from natural gas-based steam methane reforming. Common methods of producing green hydrogen include using solar panels, wind turbines and other renewable methods to power electrolyzers that can produce large amounts of hydrogen cleanly. BloombergNEF (BNEF) has predicted that green hydrogen will be less expensive than natural gas in some countries by 2050.

As part of the decarbonization efforts, green hydrogen is ultimately going to be distributed through natural gas pipelines and transported long distances. It will be very important for utility companies to monitor hydrogen in real-time to ensure safety and quality.

From a safety perspective, real-time monitoring can be used to maintain proper electrolyzer performance, as well as to avoid potentially explosive leaks at the electrolyzer, fittings, pumps, etc., and even at hydrogen fueling stations.

While TCDs tend to be less expensive than gas chromatographs, these devices have a short life span and require a reference gas. This means that if measurement is needed for a certain mixture of four gases, a representative sample of the gases would need to be continuously present in order for the TCD to work properly.

Gas chromatographs are more expensive and require a carrier gas to be supplied, either helium or hydrogen. Helium cannot be produced, meaning there is a finite supply which causes continuous price increases. While the technology is proven and capable of measuring and identifying gases quickly and distinctly, even the fastest gas chromatographs still have a lag time on the order of one minute to five minutes. This lag time could cause an issue when measuring a combustion process with an overall value that can change rapidly; the lag time of the gas chromatograph makes it incapable of catching those changes. The delayed response time, complexity and maintenance requirements, and cost (both upfront and ongoing) can also make the gas chromatograph an unappealing option.

On the other hand, inline process monitors cost roughly the same as TCDs, but have a long lifecycle and don’t require a constant reference gas source. Inline process analyzers can be installed on either side of the electrolyzer, at mixing stations or injection points, along the natural gas pipeline or at customer sites just upstream of burners, to provide real-time hydrogen measurement. Using an inline process monitor combines the value and measurement speed of a TCD with the accuracy of a gas chromatograph.

While the industry roadmaps for meeting net-zero emissions explore the infrastructure needed, there is little talk about monitoring the green hydrogen. Being able to monitor the hydrogen in real time is going to be a critical enabling factor in bringing green hydrogen to reality. By having the hydrogen measurement available in real time, processes throughout the entire hydrogen economy value chain can be tightly controlled for process optimization to maximize profitability.

About The Author: Gid Herman is the H2scan Technical Sales and Business Development Manager. H2scan provides the most accurate, tolerant and affordable hydrogen leak detection and process gas measurement solutions for industrial markets. Gid leads the global sales and marketing for the Process and Safety business.