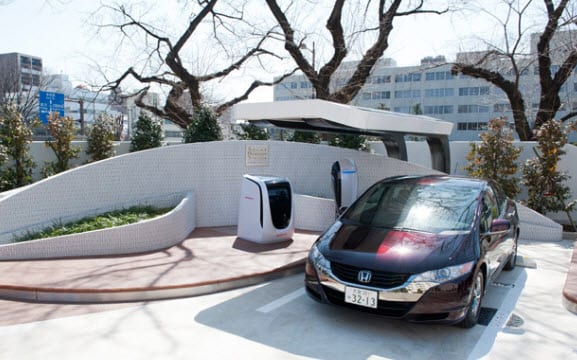 Japanese automaker Honda has announced the opening of a new hydrogen fuel station in Saitama, Japan.

The station will be open to the public and will provide drivers with a reliable and quick way to refuel their fuel cell vehicles. The station will be able to produce more than 1.5 kilograms of hydrogen gas every 24 hours, which is enough to service a significant portion of Japan’s hydrogen-powered vehicles. The most remarkable aspect of the new station at Saitama is its use of solar power.

The station is equipped with large, photovoltaic solar panels that generate 9 kilowatts of electricity every seven hours, weather permitting.

The electricity generated by the solar panels is used to power the fuel cells, allowing them to produce hydrogen gas. The hybrid system takes a great deal of strain off of Japan’s energy grid and Honda believes that it is just one of many more hydrogen fuel stations to break ground in the country.

Kiyoshi Ueda, Governor of Saitama, took time during the opening of the station this week to note the value of the Honda FCX Clarity, the automaker’s hydrogen-powered vehicle.

The Governor noted that the vehicle’s fuel cell could be very handy in case of an emergency. Indeed, the Clarity’s fuel cell can actually be used to provide a household with back-up electricity for up to six days. It does not provide enough energy to power the entirety of a household, of course, but does provide more than enough to get by in case of a power outage.