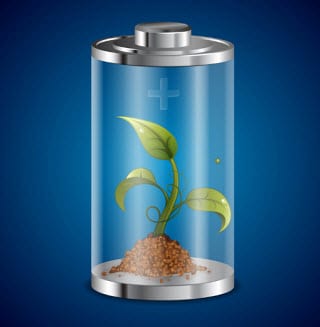 How many battery-charging devices do you have in your home? If you’re like most people, you likely have a tangled mass of cords designed to keep your mobile phones, iPods, e-readers, laptops, tablets, and cameras alive. Where would we be without batteries?

But, as much as we love and need our batteries, they are not without their problems. Some, like the ones that power our automobiles, are huge and cumbersome. Many don’t last nearly as long as they promise. And all batteries contain harmful toxins that can wreak havoc on the environment. Until now.

Thanks to science, a new type of battery may soon become a reality. The “bio battery” will enable us to have lightweight options available in a multitude of shapes. And they will be toxin-free—removing a large source of hazardous waste.

What is a bio battery?

Instead of housing electrolytes in the anode area, a bio battery contains bacteria. This bacteria consumes sugars and other matter, which causes it to release electrons.

What are the benefits of bio batteries?

The future of bio batteries

While bio batteries are not yet available to the public, Sony has big plans in the coming years. They hope to introduce bio batteries for products that require little power such as toys. They currently have one battery that will put out enough power to operate an MP3 player.

A group of German students are taking part in the International Genetically Engineered Machine competition (iGEM) at Massachusetts Institute of Technology in Boston. Their goal is to harness the bacteria, Escherichia coli, to convert glucose into energy. They would use this ability to power their own bio-battery. They contend that the bio battery will be a huge boon to under-developed countries where there is limited access to electricity.

Some other applications that are currently being examined by other researchers include:

The advent of the bio battery has the possibility of changing battery power as we know it. An industry dominated by a copper top and a fuzzy, pink bunny could become a realm mastered by microbes. And it could have repercussions in areas that we haven’t yet imagined. We’ll just have to watch with anticipation for further alternative energy news. And, in the mean time, fight the tangled mass.

How do you feel about the possibility of readily available bio batteries?

Kimberley Laws is a freelance writer and avid blogger. She has written several articles on well-known entrepreneurs such as Steve Wynn. Kimberley regularly fights to untangle her mass of chargers and power cords, but she still thinks batteries are the greatest invention since sliced bread. Although they do not smell as good.