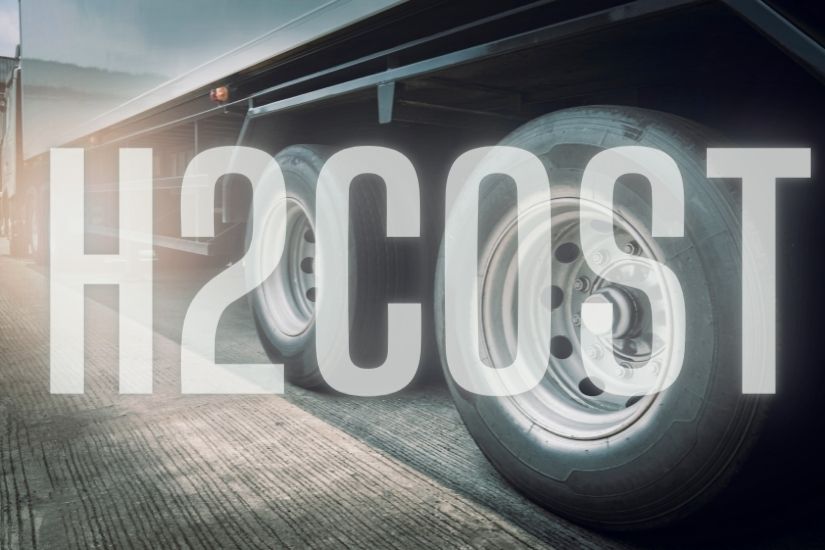 The announcement marks a milestone for Loop Energy as it believes this new product is a significant achievement in advancing the global hydrogen industry and the transition of commercial transport industries by achieving fuel cost parity with diesel by up to eight years earlier than previously possible*.

The 120 kW fuel cell system, the S1200, builds on Loop Energy’s existing technology, to provide an additional efficiency gain of 20% when it generates electricity.

Loop Energy has achieved this efficiency gain because of its patented eFlow™ fuel cell architecture. Specifically, Loop Energy uses a signature trapezoid plate with narrowing channels for its bipolar plates, which increases gas velocity down the plate to deliver superior performance for fuel efficiency, and power output. 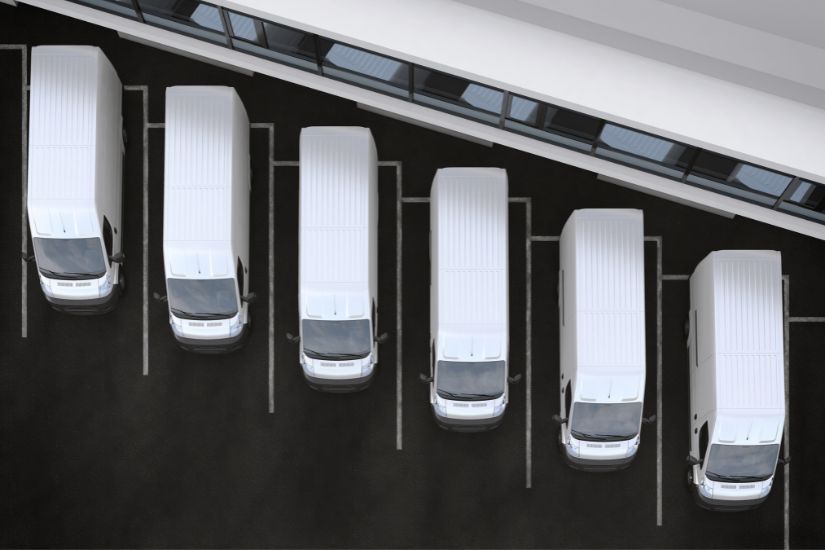 Fuel costs make up roughly half of the total cost of ownership for heavy-duty hydrogen vehicles, which makes advancement in fuel efficiency a significant factor in creating a tipping point for commercial transition from diesel to clean fuels.

Loop Energy’s presence at IAA Transportation 2022 also signifies its commitment to the European continent, where it plans to expand its presence and customer base. Loop Energy already has offices in Italy and the UK, and is actively engaged with OEMs across the region. Loop Energy is also active in Asia, with its new manufacturing facility in Shanghai.

The S1200 opens up a new market for Loop Energy as the product is specifically designed for medium- to heavy-duty commercial vehicles, which is a step up in power range and scope compared to its other fuel cell products.

The S1200 is delivered as a complete fuel cell system which simplifies and quickens integration for vehicle OEMs, and makes it a ready-to adopt solution for heavy-duty transportation and power system applications.

“We are keen to work with OEMs, governments and the wider hydrogen industry to help meet zero-emission targets. We strongly believe that energy transition must happen now, and hydrogen fuel cell technology is in prime place as an alternative to diesel-powered vehicles.”

Canadian Minister of Environment and Climate Change, The Honourable Steven Guilbeault, said: “Very happy to see Canadian companies such as Loop Energy leading in the global clean energy sector. They are creating sustainable jobs for workers, while contributing to our global climate objectives and a better future for everyone.” Assuming a typical diesel engine efficiency at 44%, we can calculate the total energy the diesel engine produces to drive 100 km: diesel contains 10.03 kWh per litre, so the truck requires 212 kWh of energy over 100 km. Knowing we require 212 kWh of energy to drive the same distance using a hydrogen-electric truck, and that hydrogen contains 33.33 kWh per kg, we can determine the hydrogen fuel cost for comparison.

Today, retail delivered hydrogen can be as low as $10 per kg, which corresponds to $90 in fuel cost over 100 km for the fully-loaded truck with 15% regenerative braking, if fitted with a Loop Energy fuel cell with 60% efficiency. Here, the hydrogen fuel cost is already matching diesel fuel.

However, if the truck was fitted with a typical fuel cell with 45% (6) efficiency, the truck’s hydrogen fuel would cost $120 for 100 km, which is not in range of diesel fuel costs.  In this situation, hydrogen must decrease to $7.50/kg, or another 25% cheaper, in order to reach parity with diesel fuel cost.  Yet, another $2.50 reduction in cost of hydrogen is not expected until 2030, according to a report by Deloitte (7). So, Loop Energy has effectively brought hydrogen-diesel fuel cost parity forward by four to eight years, and its newest product’s fuel efficiency enables hydrogen to be competitive with diesel fuel cost now. (8) 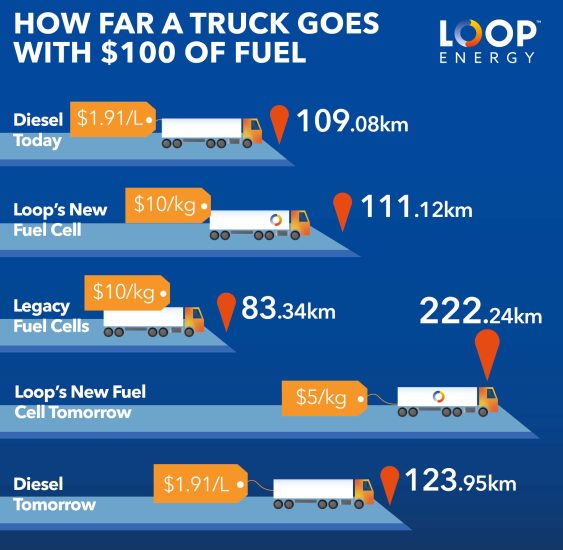