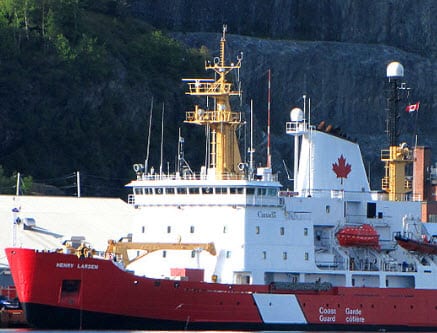 *This is not a hydrogen fuel ship

New ships to be equipped with hydrogen fuel cells

The Canadian Coast Guard is set to get a series of new hydrogen fuel cells to power three offshore science vessels. The Canadian government has issued a call for the design of these fuel cells. The government plans to provide $332,000 for an initiative that will be responsible for examining the viability of integrating hydrogen fuel cell technology into new ships. The new fuel cells will help the Coast Guard become more environmentally friendly, which aligns with the Canadian government’s efforts to break free from fossil-fuels.

Government plans to boost its use of clean technology

The three offshore science vessels are meant to replace four Coast Guard ships that are currently stationed in the Atlantic and Pacific Oceans. The science vessels are part of a new fleet of ships being developed through a $33 billion project announced by the Canadian government last year. The initiative aims to spur the use of clean technology in new ships. Hydrogen fuel cells have become a popular option because they produce no harmful emissions and can generate a large amount of electricity.

Use of fuel cells could have promising economic implications

The University of Victoria’s Zoumin Dong, a professor of mechanical engineering, has praised the Canadian government’s move to adopt hydrogen fuel cells for its new Coast Guard ships. Dong notes that the fuel cells will have obvious environmental benefits and help ships perform more efficiently, but he also suggests there could be serious economic benefits from the adoption of fuel cells as well. The professor suggests that making use of hydrogen fuel cells opens up the market for new commercial opportunities. Fuel cell manufacturers from all over the world are expected to show interest in Canada’s growing support of hydrogen fuel, and many of these companies may be looking to make the country their new home.

New ships to begin being built in 2013

According to the federal government, construction of the new Coast Guard ships is expected to begin in 2013. These vessels will be designed and built with hydrogen fuel cells in mind. These fuel cells are expected to account for the entirety of the energy demand of these ships. Other ships are scheduled to be built which incorporate hybrid energy systems.

Ene.Field project kicks off in Europe