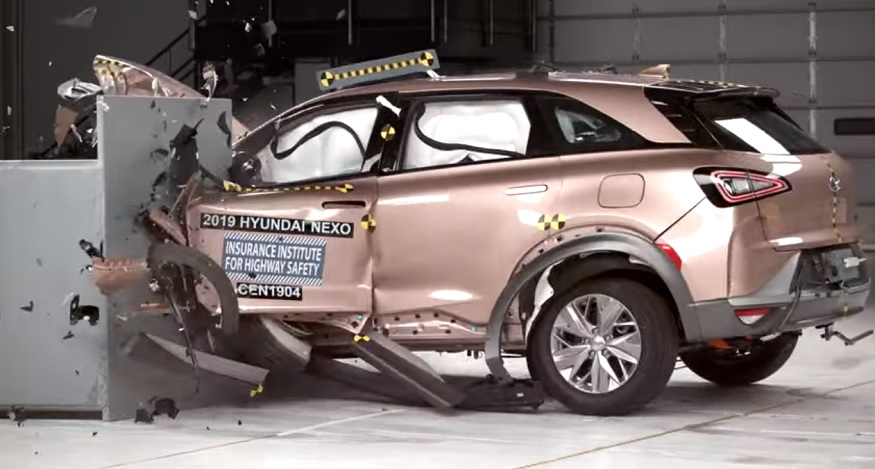 Those who have been worried about Hyundai NEXO safety, and the overall safety of driving fuel-cell electric vehicles (FCEVs) in America, may sleep better after the recent results of a test conducted by the Insurance Institute for Highway Safety (IIHS) revealed that the California-only Hyundai NEXO fuel cell SUV is indeed very safe.

The NEXO has been given the Institute’s highest award.

One of the most commons concerns expressed about hydrogen fuel cell cars is that there is a tank of compressed highly flammable gas under the body of the vehicle that many worry might explode in a car crash.

However, this is very clearly not the case with the Hyundai NEXO fuel cell SUV that was tested by the IIHS. The Institute put the vehicle through a battery of crash tests and announced that the 2019 Hyundai NEXO has been awarded its highest accolade, Top Safety Pick+.

It should be noted that this top IIHS’ Hyundai NEXO safety award applies to only models built after June 2019, which feature the upgraded headlights’ factory aim for better visibility in curves. That being said, models that were constructed before June 2019 still scored high, receiving the second highest award, Top Safety Pick.

Interestingly, according to CNET’s Road Show, the crash tests were not actually the IIHS’s idea, due to the vehicle’s limited sales potential as it’s a hydrogen car made only for California. It was actually the automaker who nominated its NEXO for testing. The IIHS was pleased to accept the opportunity to test a hydrogen fuel cell car as it had never tested this type of vehicle before.

To test its safety, the vehicle must undergo a battery of crash tests, which include evaluations of the car’s crash-avoidance systems and headlights. The NEXO received the highest rating of Good in every crash test, including one of the Institute’s tricky new tests – passenger-side small overlap front – which mirrors a driver-side test. This is done to make certain automakers have made the effort to equally protect both occupants in the vehicle.

The NEXO was given the highest rating of Superior for its forward collision warning, automatic emergency breaking system and its ability to avoid collisions at both 12 and 25 miles per hour. Models built before June 2019 received an Acceptable rating for headlights while those built after this date received a Good rating. The vehicle also received a Good rating in all crash test’s subcategories, with the exception of two, where it received Acceptable, which is the second-best rating.

of its vehicles. The South Korean company’s Santa Fe, Elantra, Kona and Sonata are some of its other vehicle models that have also received the IIHS’ highest accolade.