India is growing more aggressive with its solar energy plans. The country saw a significant change in its energy dynamics through the National Solar Mission, which called for the rapid increase in the country’s solar capacity. The National Solar Mission aims to add 20 gigawatts worth of solar capacity to the country through massive solar power projects. These projects are to have a capacity of at least 500 megawatts.

National Solar Mission launched by the new Indian government, which is interested in renewable energy

The National Solar Mission was launched by the new Indian government. The new government has adopted a very aggressive stance on renewable energy and sustainability and India has quickly become one of the strongest supporters of solar power as a result. India has emerged as one of the most attractive solar markets in the world, and government incentives are encouraging energy developers from other countries to flock to India with their projects.

Agency proposes 25 large-scale solar projects, some with a maximum capacity of 1,000 MW 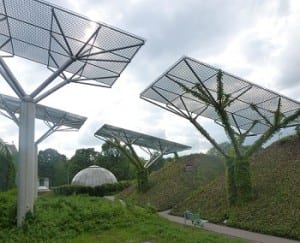 The Ministry of New and Renewable Energy has issued a proposal to launch 25 large-scale solar power projects in various parts of the country. These projects will have capacities ranging from 500 megawatts to 1,000 megawatts. The projects are meant to be developed over a five year period. The agency is also proposing the development of small solar parks that would have capacities of 100 megawatts. These solar parks would take root in the country’s smaller states, helping them generate the electrical power that they need.

One of the reasons that solar power has become so popular in India has to do with the rapidly falling costs of this form of clean energy. Photovoltaic technology is becoming less expensive, making solar power more attractive as a form of energy. This has been particularly beneficial for smaller Indian states that have limited financial resources. As solar power becomes more accessible, these states are beginning to spend less on more conventional forms of energy, such as coal and oil.