Landmead solar farm has been successfully connected to the National Grid

The United Kingdom’s largest solar energy system, called Landmead, has officially been connected to the National Grid. The solar farm produces as much as 46 megawatts of electrical power, which is approximately enough to provide energy to 14,000 British homes. The land that the solar power system is located was originally used for grazing sheep. Now, the land will be used to produce electricity from sunlight while also serving as a grazing ground.

Solar farm was developed by First Solar and Belectric

The solar farm is comprised of photovoltaic modules developed by First Solar and these modules were installed with the aid of Belectric. The two companies share ownership of the solar farm. Belectric notes that one of the favorable aspects of solar energy is that large energy systems do not make significant aesthetic changes to the landscape. Though large solar farms are easy to pick out from the air, most people do not travel by air in the British countryside and so do not see these large energy systems. 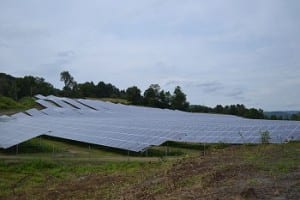 The Landmead solar farm is the fourth solar project to be borne of the First Solar and Belectric partnership. The two companies have been building solar energy systems in the United Kingdom since 2013. Combined, the two company’s solar farms are expected to produced a total of 80 megawatts of electrical power, which will be fed into the country’s energy grid. The solar farms are also expected to displace some 35,000 tons of greenhouse gases every year.

The United Kingdom has become quite fond of solar power. The country has been investing heavily in the development of new solar projects in the hopes of becoming one of the world’s leading renewable energy markets. Solar energy has managed to garner favor with the government because of its economic prospects and its ability to help the United Kingdom break away from fossil-fuels.