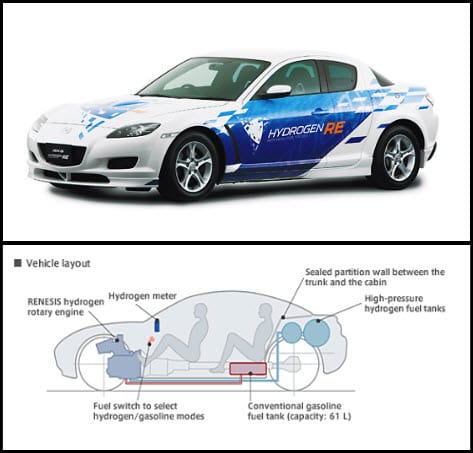 The auto industry has become enamored by hydrogen fuel cells. Automakers from around the world have adopted the energy system as the power source for many of their new vehicles. Some car manufacturers have proven resilient to the charms of hydrogen fuel cells, while others have been aggressive in their adoption of the technology. As fuel cell technology becomes more advanced, the number of automakers announcing the development of hydrogen-powered vehicles is growing. Japanese automaker Mazda has become the latest company to unveil its plans for hydrogen fuel cells.

The company is no stranger to hydrogen fuel cells, but the new RX-8 will be the first all-hydrogen vehicle Mazda has produced. In 2009, the automaker introduced the Mazda5, a hydrogen-battery hybrid. The vehicle garnered acclaim for its ability to travel 130 miles before needing to refuel. Before this, the company had plans to introduce an all-hydrogen version of its RX-8 sports car. Though this plan was scrapped in favor of the Mazda5, the automaker’s plans concerning hydrogen fuel cells do not stop there.

Fuel cell to be used as range extender for new system

Mazda has announced that it is developing a new electric motor that will be equipped with a hydrogen-powered generator. The generator contains a hydrogen fuel cell, which will be used to produce surplus electricity for the company’s future vehicles. The generator is being billed as a “range extender,” allowing its electric vehicles to travel further before needing to recharge. The company believes that this system will provide consumers with an economically viable alternative energy vehicle and help the public ease into the concept of hydrogen fuel cells.

Mazda has tentative plans to make vehicles utilizing this system available for lease in 2013. These leases are expected to be available in Japan initially, with wide-scale implementation in the following years. Though Mazda has shown support for hydrogen fuel cells, the automaker continues to express concern over the lack of an effective hydrogen fuel infrastructure.