University of Toronto researchers are studying perovskites in its purest form, and this new material, which excels at absorbing visible light, could be ideal for solar power because it could make solar panels more efficient and less expensive.

A new technique was used by researchers to grow perovskites.

Professor Ted Sargent of the Edward S. Rogers Sr. Department of Electrical & Computer Engineering at the University of Toronto and Professor Osman Bakr of the King Abdullah University of Science and Technology (KAUST), led a research team that studied perovskites in a way that they have not been studied before – as perfect single crystals – the material’s purest form.

The researchers grew perovskites using a new technique and observed how light is transformed into electricity by analyzing how electrons move through the material. They used a combination of techniques involving lasers to measure certain properties of the perovskite crystals. Through their study, the researchers were able to track down the fast motion of electrons in the perovskites. This resulted in the team being able to figure out the mobility and the diffusion length. 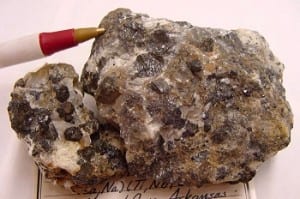 “Our work identifies the bar for the ultimate solar energy-harvesting potential of perovskites. With these materials it’s been a race to try to get record efficiencies, and our results indicate that progress is slated to continue without slowing down,” said Riccardo Comin, a post-doctoral fellow with the Sargent Group.

In addition to more efficient solar power panels, perovskites may also increase the efficiency of LEDs.

In recent years, perovskite has increased in efficiency by more than 20 percent. To put this into better perspective, its level of efficiency is very close to the commercial-grade silicon-based solar panels that currently perform the best. These panels can be found mounted on roofs in California and in Spanish deserts.

The reason that perovskite is so efficient is light is absorbed when it comes in contact with the material and exits the materials’ electrons. These electrons are gathered in the form of electric current once they travel through the material to electrical contacts on the opposite side. What the research team found was that if the sequence occurs in the reverse order, the material will release energy as light.

This discovery also revealed that perovskite may not only be beneficial for solar power, but could make LEDs more efficient, as well.