Scientists have discovered a way to boost the production of fuels and other renewable chemicals.

According to news from Berkley Lab, researchers with the Energy Biosciences Institute (EBI) have discovered a way to use biomass fermented by yeast to enhance the production of biofuels and renewable chemicals, without having to rely on costly enzyme cocktails or pre-treatments that are hard on the environment.

The researchers believe that they can engineer biofuel-producing yeast.

The researches with EBI, which is a partnership between Berkeley Lab and the University of California Berkeley, made their discovery by introducing new metabolic pathways into the yeast, which allowed the microbes to ferment hemicelluloses and cellulose – two major groups of sugar that exist in the cell wall of plants.

Jamie Cate, a biochemistry, biophysics and structural biology professor at UC Berkely and a staff scientist in Berkeley Lab’s Physical Biosciences Division, said that “We’ve discovered new chemicals generated by fungi and bacteria as metabolites in their strategy for consuming the plant cell wall that are a general part of the global carbon cycle.” Cate added that the researchers should now have the ability to “engineer biofuel-producing yeast” to copy what the bacteria and fungi do, which will open up multiple new potential scenarios for creating important renewable products, such as biofuels.

Biofuels and other alternative fuel sources are needed to replace gasoline. 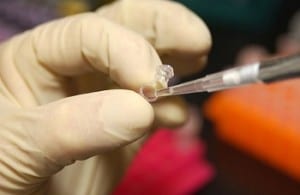 Even though the price of gas may be declining at fueling stations, the amount of carbon dioxide that is entering the atmosphere is steadily climbing upward. As a result, scientists have been looking for ways to effectively replace traditional fuels such as gasoline, diesel, and jet fuel with renewable and sustainable alternatives.

The recent discovery made by EBI researchers is extremely promising for biofuels and other renewable chemicals. However, whether or not the microbial fermentation process can be done with adequate economy is another matter, as it would require complex sugars to be converted into simple sugars that could be fermented. However, the scientists are hopeful.

The results of the EBI research has been published under the title “Expanding xylose metabolism in years for plant cell wall conversion to biofuels” in eLife.