A water bottle designed for bikes could be a big help to the environment, bikers and water scarce countries.

A new water bottle device, called the “Fontus”, utilizes solar energy technology and has been designed to attach to a bike frame, but what makes this particular water bottle especially unique is that it can generate as much as 17 ounces of water, depending on how hot and humid the conditions.

The collected water is transformed into cool and drinkable water.

Created by Austrian designer Kristof Retezár, the bottle absorbs humid air and the water that it takes from the humidity passes over a mechanism with two parts that turns it into water that is both cool and safe for consumption. It took Retezár over 30 different tests in his bathroom to perfect the final product. During his trials, he mimicked different climates, by tampering with humidity and temperature.

According to a CityLab report, how the system work is “When a cycle is in motion, air is funneled into the top holster and distributed over a ‘condensing structure.’ A solar-powered cooling element then turns it into moisture that drips down a pipe into a detachable water bottle. (Any kind of half-liter PET bottle will work.)”

The solar energy self-filling water bottle could end up saving lives in areas where water is scarce. 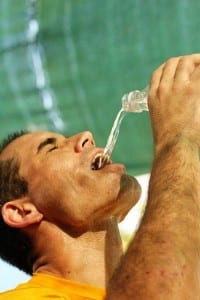 While the Fontus can certainly make a bike rider’s life a lot easier when they take part in long bike tours, as it prevents them from having to stop to find safe water sources from which to drink, it can also save lives. For the billions of people who live in countries that are hot and humid and where water is scarce and the risk of drought is a real problem, the Fontus can help to save lives.

A number of scientists predict that in less than two decades, nearly half of the population in the world could be living in conditions where water is scarce. With serious droughts already happening in places like California, and with black markets and water wars already taking place in such states experiencing water scarcity, this prediction might not be far from the truth. This is an unsettling thought, to say the least.

Inventions like Retezár’s solar energy water bottle, which is currently competing for a James Dyson Award, the Academy Awards for design engineering, could make a significant and positive difference.