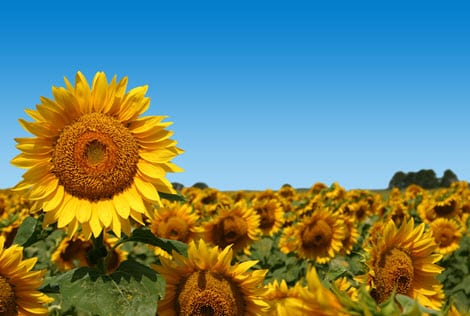 Researchers from the University of Wisconsin-Madison have taken a lesson from nature in developing a new kind of solar energy system. The system may be capable of harvesting solar radiation more efficiently throughout the day as it would adapt to the changing position of the sun. The system is based on a phenomenon that researchers have observed in sunflowers. Throughout the day, sunflowers will rotate from east to west, with their leaves also changing position in order to harvest as much solar power as they can. This process is called heliotropism.

New system adapts to the position of the sun

Researchers have engineered a solar energy system that is capable of mimicking heliotropism quite accurately. While it is not the first solar energy system that is capable of seeking out the sun and positioning itself for maximum exposure, it does not use the conventional GPS-directed method of these systems. Instead, researchers leveraged the properties they have seen in innovative materials that allow for the passive adaptation of the system to the position of the sun.

The system is comprised of a combination of liquid crystalline elastomer (LCE) and carbon nanotubes. LCE’s are exhibit change contrast and contraction when exposed to heat. Carbon nanotubes have the ability to absorb a wide range of light waves, making them valuable components to a solar energy system. The solar energy system is equipped with a mirror, which focuses sunlight onto an array composed of LCE’s and carbon nanotubes. When the LCE’s are heated, they contrast, allowing the system to bend toward the source of heat, thereby enabling the system to track the movements of the sun.

Solar energy system made possible through emergence of new materials

Though this is a simplistic approach to the harvest of solar energy, it has only been made possible due to the emergence of new materials in the past few years. These materials have allowed researchers to experiment with new solar energy systems and make these systems more efficient and capable of generating electricity through the collection of sunlight.

Biofuels to become a major source of energy in 2018