Researchers have found a method for absorbing and utilizing infrared waves with metal nanostructures.

Researchers from the California Institute of Technology (Caltech) have discovered a solar energy technology that prevents energy from photovoltaic (PV) cells in solar panels from being lost, and this new tech, involving metallic structures, can generate additional solar power.

Infrared light passes right through silicon and is never transformed into electricity.

Sunlight is made up of multiple wavelengths of light. The outermost electrons of silicon atoms in standard silicon-based PV solar cells absorb energy from some of the sun’s wavelengths. This excites the electrons and when this occurs the electrons manage to absorb enough power to detach themselves from the silicon atoms, allowing them to independently flow through the material to generate electricity. This is known as the photovoltaic effect and occurs in a solar panel’s PV cells.

That being said, the problem with traditional silicon solar panels is that they can only absorb visible light and are unable to absorb longer light wavelengths, like infrared. As a result, these wavelengths of light are not converted into electricity and, instead, are wasted as heat.

The lead researcher of the study, Harry Atwater, a Howard Hughes Professor of Applied Physics and Materials Science, explained that “The silicon absorbs only a certain fraction of the spectrum, and it is transparent to the rest.”Atwater added that if he were to place a PV module on his roof, while some of the sunlight absorbed by the silicon would be converted into energy, the rest of it would end up only heating his roof.

The idea is to pair up the new solar energy technology with traditional solar cells so both visible and infrared light can be harnessed. 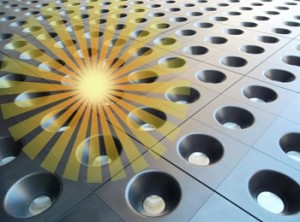 Atwater and his colleagues discovered a technique using a structure made entirely out of metal that can utilize the infrared waves. The technique that was developed is based on plasmon resonance. At the point where metal meets air, there exists on the surface of metal coordinated ripples of electrons, known as Plasmons. What the researchers found was when they made metals into miniscule nanostructures in the lab, the plasmon resonances have the ability of being tuned to other wavelengths.

The researchers demonstrated that when the metal nanostructures were excited near their resonance, the metal structures were charged up and produced a measureable electrostatic potential. Atwater explained that “This electrostatic potential is a first step in the creation of electricity.” He added that “If we can develop a way to produce a steady-state current, this could potentially be a power source.”

The idea is to use traditional silicon solar cells in tandem with plasmoelectric effect, so infrared light will be absorbed along with visible light to generate power. However, while the discovery shows promise, it may be a while before this solar energy technology is demonstrated.