In the United States, the full potential of offshore wind energy has yet to be harnessed and part of the reason for this is that information regarding its power possibilities is lacking, but the US Department of Energy’s (DOEs) Pacific Northwest National Laboratory (PNNL) is seeking to rectify this issue with two buoys that will be dropped into costal water and are equipped with advanced data collecting capabilities.

The buoys have nearly completed testing in Sequim Bay, located in Washington State.

This month, PNNL intends to split up the buoys, sending one to study in the waters near Virginia Beach, Virginia and the other will head to waters off Coos Bay, Oregon. Each buoy is valued at $1.3 million and weighs 20,000 pounds.

According to PNNL, researchers will use the buoys technology to improve their understanding of “air-sea interactions” and its affect on the amount of wind energy that can be captured by a turbine at a specific offsite location. This includes learning how much potential power the offshore winds provide the blades of an average wind turbine that stands 600 feet above the water’s surface. 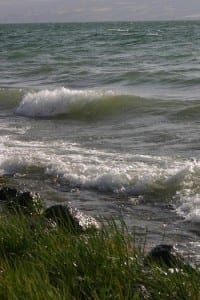 The buoys are equipped with advanced oceanographic and meteorological equipment. Some of the data collection technology on the buoys includes Acoustic Doppler sensors that probe subsurface ocean currents and light detection and ranging (LIDAR) devices that can measure the direction and speed of the wind at varying heights. There are also systems that can record barometric pressure, temperatures of air/sea surfaces and so on.

Although the buoys are not the first equipment used for this purpose, their unique technology will give them a data collection advantage that other instruments that perform similar functions cannot.

Wind energy could bring cleaner energy to the US.

This renewable form of energy has a lot of potential for delivering green energy to US households. A recent report estimates that almost 17 million average homes could be powered by more than 54 gigawatts of electricity. However, be that as it may, many still question if offshore wind energy is still a good idea. Some worry about the impact massive turbines on the sea will have on the environment and wonder what kind of infrastructure would be necessarily to transfer the power that is generated to the shore.