Solar energy prices could become cheaper in the US

A new report says solar power will be as cheap or cheaper than fossil fuels by 2016.

According to a new study form the Deutsche Bank, by 2016, electricity generated from solar energy may cost equal or less than typical electricity bill prices in 47 US states, assuming that the United States continues with its 30% tax credit on system costs, a tax credit set to expire in 2016, Bloomberg reported.

Solar electricity prices will continue to drop with ever-improving technology and affordable financing.

The Deutsche Bank estimates that even if tax credits decline, 10% of the cost of solar energy will reach price parity with traditional electricity in 36 states.

A reduction in cost is partly due to the fact that solar photovoltaic (PV) panels are no longer as exotic as they once were. On the contrary, they are becoming more mainstream and as they continue to become more ordinary, prices will continue to plummet. Furthermore, the PV panels are a technology that continues to be improved and as more technological advances are made, this form of renewable energy will perform with greater efficiency, which can also, over time, lower costs.

Energy produced by solar power will become more dominate over time compared to conventional electricity generation and this is because it is not a fuel, it is a technology. With time, technology improves, efficiency increases and princes drop. The same cannot be said for limited resources like fossil fuels, however. 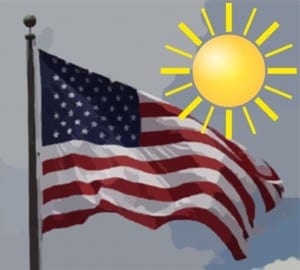 The Deutsch Bank report noted that in 10 states, which are responsible for 90% of US solar power production, solar has already managed to reach grid parity. Installed capacity growth just in these ten states will increase up to six times during the next three to four years.

By 2050, solar energy will be the largest single source of electricity in the world.

While solar energy presently is only responsible for a fraction of 1% of electricity worldwide, according to an estimate recently given by the International Energy Agency, in 36 years it will become the world’s biggest solitary source of electricity.

Due to the small market share solar energy has today, it does not matter how fast capacity expands. Although it is likely that it will eventually outshine gas and coal, the impact solar has on the price of these other energy sources will not be immediate.