Wind energy has reached a new milestone in Australia. South Australia’s wind farms were able to meet 43% of the state’s energy needs during July of this year, according to the Clean Energy Council. Wind power has been gaining momentum in Australia recently as the country looks for ways to distance itself from fossil-fuels and reduce the emissions it produces every year. Though government support for renewable energy has been reduced somewhat, solar and wind are finding a degree of success in many parts of the country.

During certain days, South Australia’s wind farms were able to meet the entirety of the state’s energy needs. These wind farms have set a new record in terms of energy production in Australia and this feat is drawing more attention to the potential value of clean energy. Countries are often unenthusiastic about clean energy because of its political implications, but electrical power generated through the use of fossil-fuels is becoming more expensive. The economic prospects of renewable energy are causing some countries to re-evaluate their support of newer forms of power. 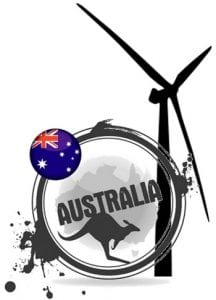 Over the past 10 years, more than $5 billion has been invested in Australia’s wind energy sector. This money has come from both the public and private sectors. Recently, the Australian government has been showing support for offshore wind projects. These projects have the potential to tap into the powerful wind currents that can be found in open water. Typically, these projects are more expensive to see through to completion and there are certain environmental concerns regarding installing turbines in the ocean.

The Australian government may be showing less support for renewable energy, but the country is still a very attractive market for energy developers. Australia is home to some innovative solar energy projects and has recently become a new market for companies specializing in bringing this form of energy to the residential sector. Wind power has established a strong foothold in the country and if the offshore market continues to expand, more developers are likely to bring their projects to Australia.