The New England region of the United States, which is comprised of six states, is leading the way in renewable energy adoption. The region has been moving away from fossil-fuels quite aggressively.  In 2014, two states in the region, Rhode Island and Vermont, used very little coal to generate electricity. Now, Rhode Island is set to play host to one of the country’s first offshore wind energy systems, called the Block Island Wind Farm.

The Block Island Wind Farm will initially be comprised of five massive wind turbines, all of which will be installed by the end of this month. The offshore wind energy system is scheduled to go online and begin generating electricity in November of this year. When fully operational, the wind farm will be able to generate 30 megawatts of electrical power. This is enough energy to power every home on Block Island, where the wind farm is located. The wind farm will take advantage of the strong and reliable wind currents that are often seen within the region.

Offshore projects have been taking form slowly in the United States 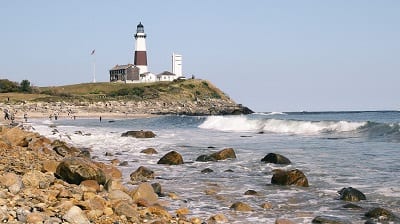 The offshore wind energy system is not the first of its kind, but may be the first to begin operation and produce electricity. Several other offshore projects have begun to take form in the United States, but several of these projects have stalled. The slow development of offshore wind projects is partly due to the Production Tax Credit being allowed to expire in the past. This federal initiative has provided significant support to wind projects throughout the country, including those taking form offshore. Though the initiative has been renewed, it initial expiration caused a drop in confidence among investors that supported new energy projects.

If the Block Island Wind Farm begins operation on schedule, New England would lead the way in offshore wind energy. Rhode Island will benefit significantly from this, helping the state become more environmentally friendly and further distance itself from fossil-fuels. Rhode Island intends to be completely reliant on renewable energy in the coming years, completely abandoning fossil-fuels.