A Primer on Fuel Cell Vehicles

Hydrogen fuel cells broken into the auto industry in a major way, with many of the world’s leading automakers planning to release hydrogen-powered vehicles within the next few years. While auto makers understand these energy systems quite well, consumers still have questions about how they work, whether or not they are environmentally friendly, and if they are a good fit for transportation. Many people also have questions about the viability of hydrogen in general, with some expressing concern that hydrogen may not be an environmentally friendly alternative to conventional forms of power.

Fuel cell vehicles are electric vehicles, in that they use electricity as a replacement for traditional gasoline. Conventional electric vehicles use batteries to power their various components and powertrain, but vehicles that run on hydrogen also use fuel cells to operate. The fuel cells use hydrogen to generate electrical power and this process produces nothing more than water vapor and oxygen. In this sense, fuel cell vehicles are clean, but fuel cells are not completely separated from emissions production.

Producing hydrogen is an energy intensive process, which is powered primarily through the use of natural gas, a fossil-fuel. Hydrogen production is linked to significant emissions production, as is the development of fuel cell energy systems. Fuel cells make use of platinum and other materials to operate effectively, and these materials must be mined from the earth, which itself is an environmentally hazardous process. So, by association with these processes, fuel cells and the vehicles that use them are not wholly environmentally friendly, though they produce no emissions directly. 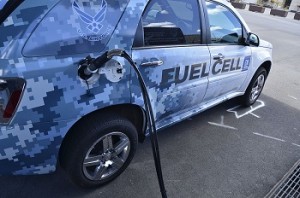 There is some debate over whether fuel cell vehicles or battery electrics are the best option for the transportation space. Battery electrics are somewhat less expensive than other vehicles, but have a lower operational range and they take longer to charge than fuel cell vehicles. Mechanically, fuel cells are more durable than batteries and can produce their own electrical power, rather than serving as an energy storage system. Fuel cell vehicles can be fueled in five minutes or less and some of these vehicles can travel more than 300 miles on a single tank of hydrogen fuel.

There are a very limited number of fuel cell vehicles currently available, especially in the United States. This will change in the coming years, however, as automakers begin to comply with Zero Emission Vehicle Mandate programs that several states have adopted. These programs require automakers to sell a certain percentage of clean vehicles beginning in 2018. That year, auto makers are expected to deploy 17,000 battery electric and fuel cell vehicles throughout the country. This number will reach 109,000 in 2025. Overall, nearly 1.5 million clean vehicles, including plug-in hybrids are expected to be released in the United States from 2018 to 2025.