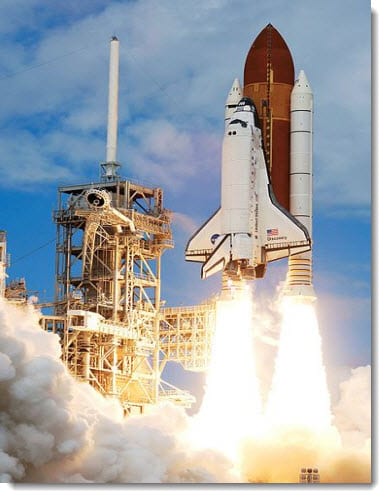 A new powerful lighting array was spotted at the launch of space shuttle Atlantis earlier this month.

Thousands flocked to the Kennedy Space Center for the last voyage of the space craft, marking the closure of NASA’s space faring program. Given the gravity of the occasion, the space agency was eager to ensure that not a second was missed in the gloomy twilight of the launch. To this end, NASA partnered with Sandia National Labs, a multiprogramming engineering laboratory working with the Department of Energy.

Sandia provided NASA with several massive lighting solutions for the Atlantis launch. The lights were quite powerful, bathing the area in a brilliant hue and illuminating the space shuttle. Notably, the lighting units were attached to a small box, which many thought were independent diesel generators. These boxes were, in fact, hydrogen fuel cells.

The lighting solution is a late-stage prototype from Sandia Labs.

The system uses light emitting plasma and fuel cells and operates with zero-emissions. The entire system was designed for efficiency in mind, leading Sandia to opt for fuel cells over other alternative fueling solutions because of the mobility of the units. The fuel cells can be used indoors as they release no noxious gases into the environment and are renowned for their durability.

While the system was used for lighting in this case, the fuel cells used are powerful enough to supply electricity to a number of other applications simultaneously, such as metal detectors and security systems.