Scientists at Stockholm’s Royal Institute of Technology are attempting to prevent discarded clothing from being sent to landfills and to help preserve cotton, an important resource that could become quite scarce in the future, by inventing a new form of recycling technology that will allow the fabric to be reused.

The worldwide consumption of clothing has notably increased throughout the years.

According to United Nations Food and Agriculture Organization (FAO) statistics, in 2010, around the world, people consumed 69.7 million tons of clothing. This is quite the increase from a decade earlier when consumption was recorded at 47.4 million tons. To put this into greater perspective, each person in 2013 consumed roughly 10 kilograms of clothes.

This may not seem like a large amount, but considering the size of the world’s population, the fact that it is growing, and the consumption habits of western civilization, clothing consumption is only likely to increase. Therefore, what this means is that more clothing will end up in landfills or it will be used for other unsustainable purposes, such as filler material used under wall-to-wall carpets, which eventually ends up back in a landfill down the road once carpet is discarded.

At the Royal Institute of Technology, scientists have developed a method for recreating cotton. This is important technology news considering cotton makes up about one third of the world’s textile consumption and it is in danger of becoming a resource in short supply due to the world’s increasing population, which places a greater demand for land to be used for food production.

Re:newcell is preparing to build its first fabric-recycling facility using this recycling technology. 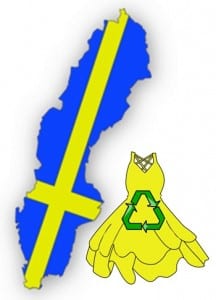 Back in June, a team of Swedish companies, who collaborated on the project, produced the first garment in the world to be made completely out of recycled cotton. They made a yellow dress suitable to today’s latest fashion trends comparable to what a person could find in retail stores such as Zara and H&M.

According to Henrik Norlin, the business development manager at re:newcell, the company behind the creation of the innovative recycled material, “The scalability of this process is enormous.” Norlin added that “The technology allows us to recycle all materials that contain cellulose.”

How the process works is old cotton apparel is brought to a factory where it is shredded and turned into a substance that is similar to porridge. The porridge is broken down to the molecule level after materials that cannot be recycled (ex. zippers, buttons) are removed. From there it is transformed into a fiber substance utilized for thread , resulting in the fabric rayon.

Norlin commented that with the recycling technology they “can recycle fabrics that contain a mix of cotton and other materials but get the best results when recycling pure cotton.” The company intends to build its first recycling factory, with the capability of processing 2,000 tons of fabric annually, which is set to open within the next 18 months.