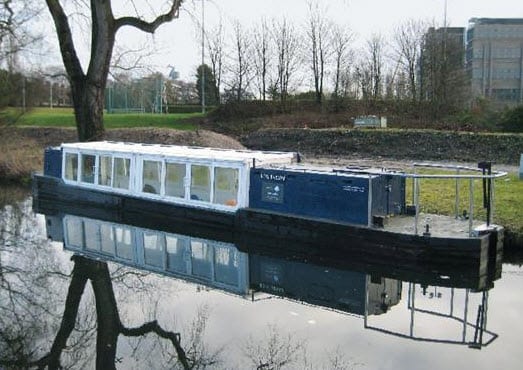 Engineers from the United Kingdom’s University of Birmingham have built a canal boat that runs on hydrogen fuel cells.

The boat is part of a project that is meant to show the viability of hydrogen fuel in maritime operations. Hydrogen is often considered one of the most efficient and powerful variants of alternative energy, a claim that is supported by the fabled performance of fuel cells. For shipping, hydrogen presents a particular benefit in that bigger, stronger fuel cells can be used as most ships are not burdened by the same weight restrictions stifling automobiles and aircraft.

Aboard the university’s canal boat is a large fuel cell system. The old diesel engine of the barge was replaced with a highly efficient electric engine. A heavy-duty hydrogen storage tank was also installed to store the ship’s vast fuel supply.

The ship, named Ross Barlow, performed remarkably well during its maiden voyage, meeting the demands of trekking the waterways with ease. A crew of researchers recently took the ship on another voyage over the summer in order to investigate how the ship’s energy system could be used to provide power for basic amenities during travel. During the four-day voyage, the crew was able to keep their telephones and laptops charged, along with various other electronic equipment required for testing, without putting too much strain on the fuel cell system.

Toyota to launch fuel cell SUV in 2015, hoping for a stable hydrogen infrastructure by that time