A team of researchers have made a discovery that could lead to large-scale solar energy storage.

The discovery, made by a team of Stanford University engineers, is based on the fact that heating metal oxides, like rust, could be the basis for building a solar-powered battery; a solar technology that would result in the production and storage of electricity by separating the oxygen and hydrogen atoms that create water. In other words, rust and other ordinary metal oxides can be fashioned into solar cells able to split water into oxygen and hydrogen.

Solar cells that can split H2O during the day can store energy that can be used at night.

The Stanford team, led by William Chueh, assistant professor of materials science and engineering, and Nicholas Melosh, associate professor in the same department, discovered that using solar cells to split water during the day provides a way to store energy that can be used when the sun is no longer shining.

Water is split into hydrogen and oxygen by energy from electrons. Photons captures by the solar cells are converted into these electrons. By recombining hydrogen and oxygen once it’s dark, the energy is reclaimed and “dispatch” power back into the electrical grid. This is s done without burning fossil fuels, preventing additional carbon from being released into the atmosphere, Stanford reported. 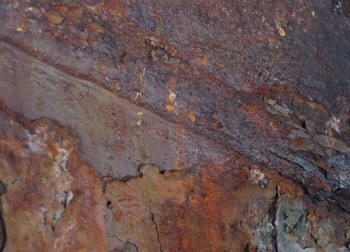 The unexpected solar technology discovery could revolutionize how energy is produced, stored and consumed.

The Stanford team showed in their research that as metal oxide solar cells heat up, they convert photons into electrons with greater efficiency. However, this isn’t the case with silicon solar cells, which lose efficiency as they become hotter.

William Chueh explained that “We’ve shown that inexpensive, abundant and readily processed metal oxides could become better producers of electricity than was previously supposed.” He added that “By combining heat and light, solar water-splitting cells based on metal oxides become significantly more efficient at storing the inexhaustible power of the sun for use on demand.”

The discovery could result in a revolutionary change in how the world produces, stores and consumes energy. Chueh believes that this discovery will concentrate attention on developing metal oxides as cost-effective alternatives to silicon solar cells.

In addition, Chueh believes that aside from the potential this solar technology has in regard to providing a day-to-night energy storage solution, that pure hydrogen gas created by water-splitting could also be utilized to directly power vehicles or other machines without pollution, creating a carbon-neutral energy cycle.