The U.S. government has given the oil and gas giant approval to commence drilling in the Chukchi Sea.

Much to the chagrin of many environmentalists and environmental groups, the U.S. government gave Shell the go-ahead to resume its arctic drilling plans, and the oil and gas company will soon begin its oil exploration efforts off Alaska’s North Slope in the Chukchi Sea with its 25-vessel fleet, of which the Polar Pioneer oil rig is the biggest vessel.

Shell was forced to abandon its oil exploration efforts in the arctic back in 2012.

In 2012, Shell pursued its arctic drilling plans after receiving federal leases from the then U.S. president George W. Bush. However, not only did this exploration have a troubled start, but during the summer of that same year, Shell drilled two wells, but these wells were not permitted by the federal government to reach oil-bearing depth. The reason was a containment device had failed during testing, and this device was required to be on hand in the event of a well disaster.

Noble, the contractor responsible for operating the drilling vessel called the Noble Discoverer, paid a $12.2 million fine after pleading guilty to eight felony counts for its conduct in 2012. The contractor plead guilty to illegally discharging wastewater overboard and to falsifying entry logs tracking the disposal of shipboard oil. 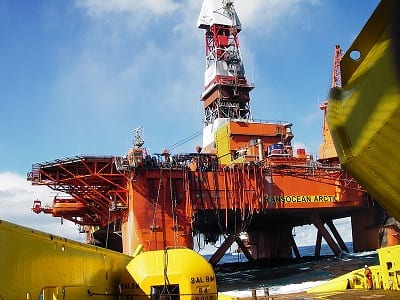 According to Shell officials, the company has since made major changes in its Arctic operation. One of its changes was considerably increasing the involvement of maritime companies, one of them being Crowley Maritime, which has extensive Alaska experience.

The Noble Discoverer is one of the vessels returning to the arctic and, unlike the Polar Pioneer, it travels under its own power.

Some environmental groups believe that arctic drilling is more dangerous than drilling in the Mexican Gulf.

Even though U.S. data approximates that America’s Arctic seas are home to 26 trillion cubic meters of natural gas and 22 billion barrels of recoverable oil, the Natural Resources Defence Council, and other environmental groups, believe that arctic drilling is more hazardous than drilling for oil in the Mexican Gulf. The reason is that no technology exists that can clean up an oil spill in the extremely cold water and under the ice.

Furthermore, the nearest coastguard station that has the equipment needed to respond to an oil spill, if one should occur, is reportedly over 1,600 km (994 miles) away.

Although Shell has said that it will be employing more rigorous safety standards than before and promises that “this time will be different,” this promise isn’t enough to appease those who are opposed to arctic drilling.