Getting rural Africa on the grid.

A solar project aimed at making women in Ghana both entrepreneurs and engineers will get rural parts of the African country on the grid.

Women in the rural villages will be taught how to make small, inexpensive, and low-tech solar-powered devices that can be sold locally. The first devices created will be solar-powered cell phone chargers.

A two-week workshop in January 2014 led by Social Venture Africa, Know Your Planet, and Village Exchange Ghana will provide eight women with the from the Volta Regional area in the eastern part of the country with the necessary skill-set to create the solar-powered items.

Solar power provides those living in rural Ghana with some of the same benefits of their counterparts in the nation’s cities. According to a 2010 study completed by World Bank in 2010, 60-65 percent of the of the population of Ghana had access to electricity, with the bulk of that population living in cities.

Women in Ghana are being used for this solar revolution because they are the ones who play a critical role in the households. They are the ones responsible for running the household, providing fresh water for drinking and bathing, and buying fuel for heating and cooking.

Utilizing the female workforce in Ghana means that these women can not only integrate solar-power into their own households, but they can also help to better support their families financially.

The lights cost as little as $10 and last for up to five years. They provide women with the opportunity to use the solar-powered lights in place of kerosene lamps.

While a small group of women learns how to make solar-powered devices, Ghana itself will be taking on an even larger role in the solar revolution.

Over the next two years, a 155-megawatt power plant will be constructed. The power plant, Nzema, will be the largest photovoltaic solar power plant in Africa once it is completed. It will create more than 1,000 jobs and boost the nation’s electric capacity by six percent.

The plant will bring energy to more than 100,000 homes by the time it is completed.

It is the hope of sub-Saharan nation’s government that the changes brought about with the solar revolution will help grow the country’s middle class and help the nation become the financial epicenter of all other sub-Saharan nations. 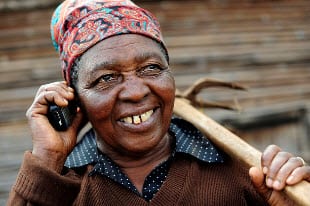