People have been talking about hydrogen fueled cars for decades. The hydrogen car has transformed from a futuristic impossibility akin to George Jetson’s space mobile, to the punch line of a joke told around the water cooler, to where it is now–a reality for an exclusive few, but impractical and unaffordable for most. Will the hydrogen car ever become a common sight in driveways across North America? A group of California politicians and some major automotive companies believe it can. And should.

What is a hydrogen car?

A hydrogen fuel cell vehicle is a car that uses a hydrogen fuel cell instead of a traditional gasoline engine. The fuel cell converts hydrogen into electricity, which, in turn, powers the vehicle. These automobiles have no polluting tailpipe emissions–instead, spewing just harmless water vapors.

These cars are driven in the exact same way as their gas-powered counterparts, except they are quieter like an electric car. They even boast a range similar to traditional vehicles, offering as much as 250 miles per tank of hydrogen.

Hydrogen is one of the most plentiful elements on the planet. It can be extracted from natural gas, but it can also be generated through water electrolysis.

Why aren’t we all driving hydrogen cars?

Hydrogen cars, despite their many environmental benefits, remain a rarity for a number of reasons. One major reason is the price. Hydrogen fuel-cell vehicles are expensive to produce, putting them out of reach for most people. Volkswagen, in fact, has stated that these automobiles are not viable due to their hefty price tags.

Some people are leery of hydrogen–perhaps, recalling the famous Hindenburg disaster. Others have labelled these cars as “boring and predictable” to drive.

The biggest obstacle to most people, however, is the extreme lack of hydrogen refueling stations. This is the conundrum. Investors do not want to embark on the risky business of creating fueling stations for a limited number of vehicles. Conversely, no one wants to buy a vehicle that they cannot refuel. 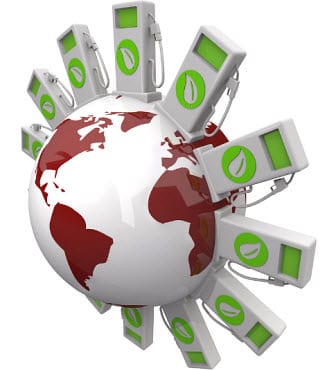 California Governor, Jerry Brown, is determined to meet the goals set out by his Zero Emission Vehicles Action Plan–a plan which, ideally, would lead to a sizeable increase in the number of hydrogen fuel cell vehicles on state roads. He plans to do this by removing the most significant barrier facing hydrogen cars–a lack of fueling stations.

The target is getting 1.5 million emission-free vehicles on the roads of California by 2025. This will be achieved by creating over 100 refueling stations aimed at serving both private and commercial hydrogen vehicles.

Several manufacturers have become pivotal players in driving the shift towards hydrogen-powered cars. The federal Energy Department has embarked on a partnership with Toyota, Nissan and Mercedes-Benz called H2USA. Hyundai has also been a leader in hydrogen fueled vehicles.

Toyota, who has been working in conjunction with BMW, will be introducing a 2015 hydrogen fueled model as early as late 2014. One thousand of Hyundai’s hydrogen-powered Tucson will be available for lease in 2015. Renault and Nissan have joined forces to develop an offering for 2017. General Motors and Honda have also announced a cooperative venture, but Honda will have its own “Clarity” available in 2015 in limited numbers.

Although the hydrogen car will still be an oddity on the nation’s highways and byways, it appears that it is no longer a concept limited to apocalyptic novels and Saturday morning cartoons. It is a reality–a reality that may just catch on. Only time will tell.

What do you think the future holds for hydrogen-fuelled cars?

Kimberley Laws is a freelance writer and avid blogger. She has written on a plethora of business topics including online reputation management, social media marketing, and mobile payments. You can follow her at The Embiggens Project.